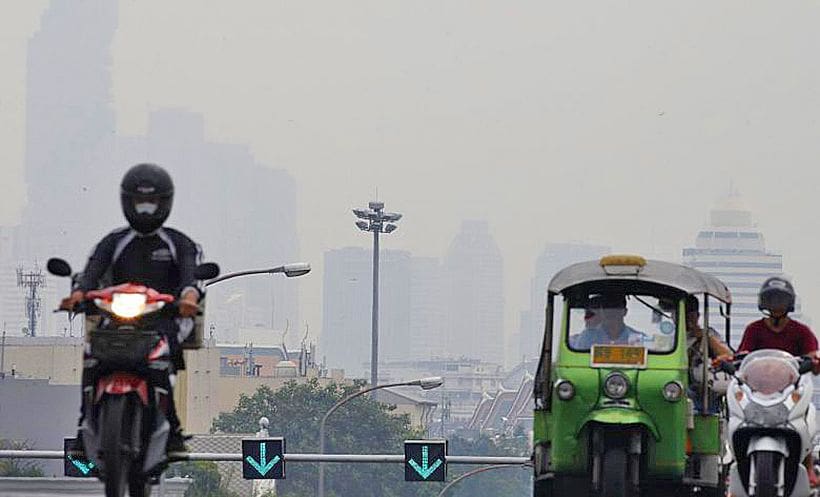 As promised, Bangkok and the central region have been battling with enduring smog this weekend. On Friday the Thai Meteorological Department warned of smog and haze continuing over the weekend in parts of the capital and in nearby Pattaya due to a weakening cold front in the north of country, bordering Laos.

Given the fingers pointing at Bangkok’s old buses, high traffic volumes and industry, it’s a bit of a mystery that the levels are so high on a Sunday morning.

Authorities have been fumbling all week with photo opportunities, empty promises of ‘solutions’ and even denials that the smog was as bad as reported. They’ve set up shows or water cannons in public areas in a display of feeble PR efforts to assuage Bangkokians of their earnest efforts to tackle the smog problem.

They even slammed the international websites that routinely publish air quality guides around the world from data in each location. In Bangkok, along, there are eight measurement stations that check the air quality every 10 minutes.

Bangkok and some parts of the EEC (Eastern Economic Corridor), the nation’s industrial hub, had consistent measurements above 150, considered ‘unhealthy’. This, on a morning when traffic and industrial activity are at their lowest levels for the whole week.

The thick smog that has been plaguing Bangkok for around a week now is more dangerous than expected. It is because of the dangerous PM 2.5 dust particles, believed to cause lots of problems, including cancer. This is a problem around the country through vehicle emissions and crop burning. Bangkok may not be the most polluted in the world but it is one of the most visited. The BBC reported on the Big Mango’s smog woes…

Experience the creative vibe during Bangkok Design Week with Airbnb