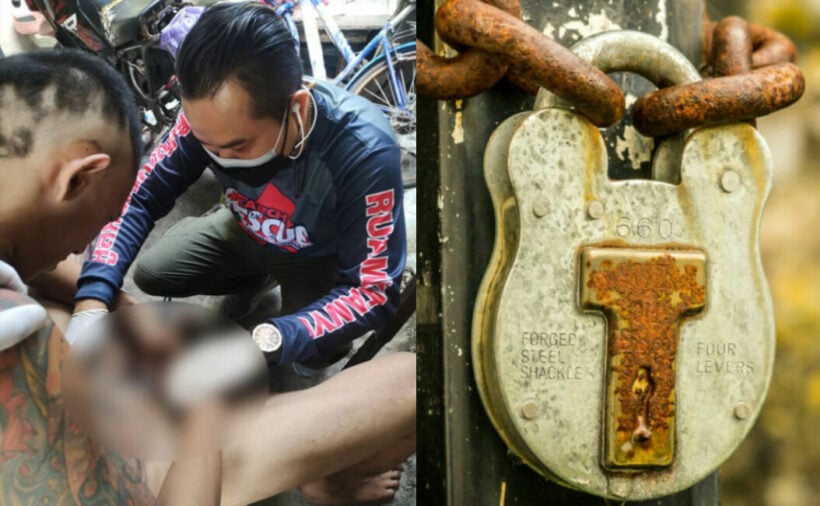 PHOTO: A Bangkok man got his penis locked in a padlock. (via INN)

In a story that we can’t believe has happened twice this year, a man has gotten his penis stuck in a padlock and required emergency medical rescue services. This time, the incident took place in the Phaya Thai district of Bangkok where Ruam Katanyu Foundation rescue workers were summoned to the scene.

When they arrived at the street off of Rama 6 – Soi Suan Ngern – they found a man covered in tattoos and little else had gotten his penis stuck in a locked padlock. The rescue squad was able to eventually free the willy using what was reported as “specialist equipment” to cut him free of the lock.

Likely to the man’s great relief, his age and identity were not released publicly and all photos released featured a substantial amount of blurring, both for anonymity and decency. His genitals were said to be red and swollen after his penis had been stuck in the padlock for an unknown amount of time.

Unlike the last report of a man inexplicably locking his penis in a padlock back in July, few details were released about this incident of what is hopefully not a growing trend in Thailand. Many more details were released in the last incident, including such gems as that the man has spent an alarming 14 days trying to remove the padlock himself after losing the key before his member became infected and unbearably painful, and that his mother made it clear that he was very single and enjoyed putting his penis through small holes apparently.

Authorities in the previous incident in July had made details of the story public, stating that they hoped it would prevent others from doing the same kind of thing with a padlock or similar, but unfortunately at least one tattooed man in Bangkok did not receive the vital warning for the safety of his penis.

Rookiescot
Aw cmon guys. Let he whos penis has not accidentally fallen into a padlock cast the first stone.

AdvocatusDiaboli
Obviously he wanted an early start in the TAT’s “fly a kite” event, but got locked 🔒 out by the organisers!
BillO
This is exactly why I love Thailand! If you can’t laugh here you can’t laugh anywhere! Lol
BIGGLES
Lol! Bless him, his Mother states he likes to put his penis in small holes. Embarrassing or what? What a c..k head! 🤣🤣🤣🤣🤣🤣
HiuMak
Is this a "Penis Lockdown"?