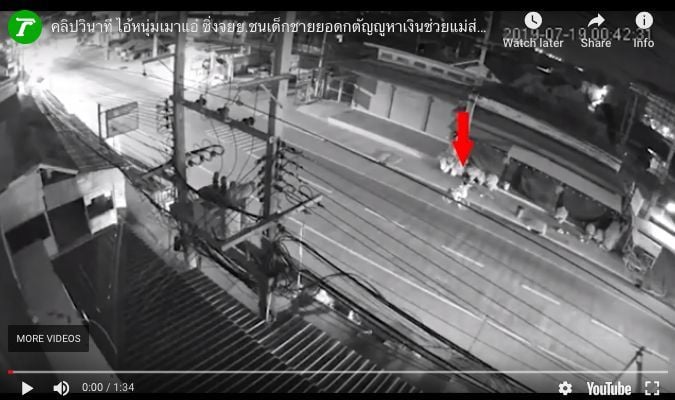 Police are looking for a motorcyclist who was caught on surveillance camera in Bang Pakong, a district in southern Chachoengsao, east of Bangkok, driving the wrong way – ghost riding – down a street and hitting a 14 year old boy on his bike.

The teenager was just waiting on the side of the road with the bicycle’s wheels sitting in the gutter when he was struck.

Worawut Chuthaisong, who was already starting to provide an income for his family, according to Thai Rath, had just finished the morning washing. The teenager was also also employed to clean dishes to help ends meet and send his 5 and 7 year old siblings to school.

Witnesses told police that the motorcycle driver appeared drunk and after the collision got back on his bike and fled the scene. No one noticed the letters on the bike’s registration plate but said it was a Honda Click with the number ‘8483’.