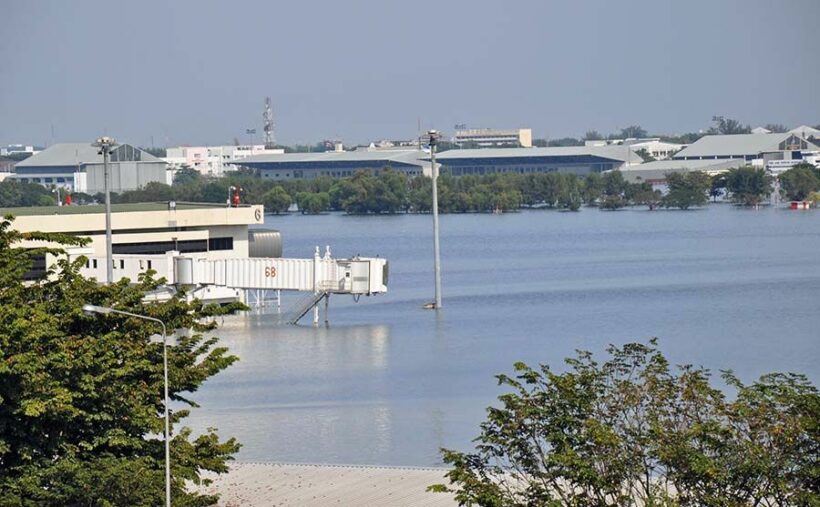 The director of Bangkok’s Don Mueang airport says the facility can cope with the threat of flooding and mechanisms are in place to drain floodwater. According to a Bangkok Post report, Thanee Chuangchoo says the airport has the means to drain excess water from runways, taxi-ways, and the aircraft apron within 3 hours.

Thanee says the airport’s drainage system consists of 3 ponds, which can absorb a million cubic metres of water. Don Mueang also has a pump station to drain water to the Premprachakorn canal on Vibhavadi Rangsit Road and another pump station to the east, which can divert floodwater to canals and roads. If necessary, he adds that the barrier gate at Vibhavadi Rangsit Road can be closed to prevent flooding from nearby areas. Sandbags, extra pumps, and backup power sources have all been prepared.

The Bangkok Post reports that a traffic plan will be implemented to cope with floods, and Don Mueang bosses will work with the relevant agencies and the private sector to ensure the airport can remain operational. It’s hoped there will be no repeat of the situation that occurred in 2011, when the airport was badly affected by major flooding.

Meanwhile, over at Suvarnabhumi Airport, director Kittipong Kittikachorn says the facility is also ready to cope with any potential flooding. A 3.5 metre ditch surrounds the airport, stretching for 23 kilometres, to protect Suvarnabhumi from the threat of floods. The airport has 6 water retention basins and canals, which can hold between 4 and 7 million cubic metres of water, in addition to 8 pumps at 2 drainage stations.

In related news, the governor of the north-eastern province of Khon Kaen has confirmed that some areas of the province have been affected by flooding. According to the Bangkok Post report, the Chi River overflowed on Tuesday night, leading to floods in a number of sub-districts, with traffic blocked and roads damaged.

gummy
Well after 2011 they spent quite a lot of money building flood walls around the perimeter so hopefully this time they will not suffer if the water surge is greater than 2011. As I lived close by at the time…
RobMuir
2 minutes ago, Bob20 said: Looks like Captain Sully left the Hudson and came to Thailand 😉 I remember back in the 1980's our flight home was delayed for many hours (9?) because Don Muang had flooded.  It had taken…

mickkotlarski
2 hours ago, Thaiger said: The director of Bangkok’s Don Mueang airport says the facility can cope with the threat of flooding and mechanisms are in place to drain floodwater. According to a Bangkok Post report, Thanee Chuangchoo says the…