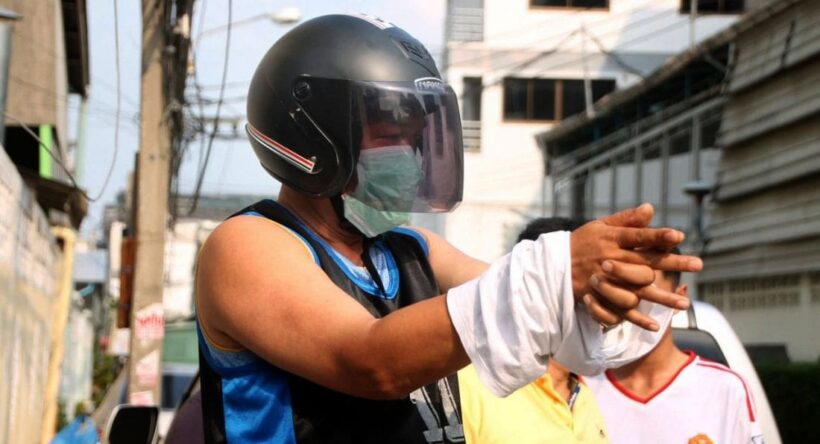 Police have brought 50 year old Kamtan Singhanart to the Thon Buri Court’s order for an initial 12 day detention period after being accused of splashing acid on his wife Chorladda Tharawan’s face before fleeing on November 9.

The Nation reports that Chorladda died as a result of her injuries after seeking treatment at Praram 2 Hospital.

That hospital reportedly sent her to Bang Mod Hospital where she was subscribed for the “gold card” universal healthcare scheme.

She died before she reached the Bang Mod Hospital. Praram 2 Hospital has been the focus of criticism from Chorladda’s family and netizens over allegations that they failed to treat her and are partially responsible for her death. The hospital maintains that the accusation is untrue.

;lpA potential lawsuit is being considered against the hospital as outspoken lawyer Atchariya Ruangratanapong acts on behalf of the patient’s family.

A Bangkoktaxi driver who picked up the acid-wounded Chorladda and her accompanying 12 year old daughter from Praram 2 Hospital to Bang Mod Hospital on November 9, told police on Monday evening that the woman was still conscious when she arrived at the second hospital.

This was contrary to the initial account by Chorladda’s daughter, who said her mother died on the way and that a Bang Mod Hospital doctor then tried to resuscitate her but was unable to bring her back.

Testifying as a witness to Tha Kham deputy superintendent Pol Lt-Colonel Sakhon Sriwattanakapong, taxi driver, 37 year old Sa-ngad Datchuyawat, says a Bang Mod staff member pushing a gurney asked Chorladda whether she was still able to “hang in there” while being wheeled away.

The taxi driver said he was told by the first hospital’s staff that Chorladda had sustained an injury from being scalded by boiling water and wanted to get a lift to Bang Mod Hospital, which staff said had already been informed of her transfer.

Meanwhile, Kamtan told police that he was not a cruel person after being arrested on Sunday night at his friend’s house in Nakhon Sawan. This was in line with his neighbour’s claim that Kamtan was normally a good man who did everything he could for his family at their rented home in Samae Dam sub-district.

Neighbours have said they believe he committed the alleged crime on an impulse. Police objected to Kamtan getting a bail release on the grounds that this case carried a severe penalty.