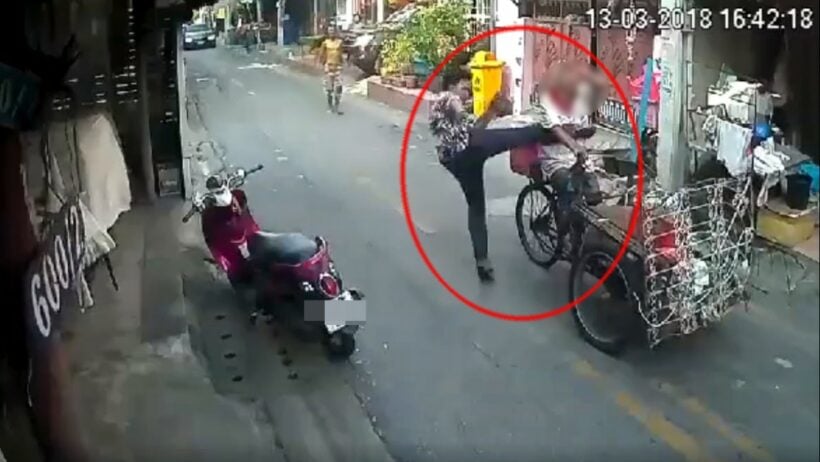 A 21 year old motorcyclist, alleged to have assaulted an 82 year old tricycle-riding scavenger over a minor collision in Bangkok’s Huai Kwang district on March 13, has been hit with an additional charge of causing death to another person by inflicting injury without intent to cause death.

The new charge was filed against Narathorn Sodetiyung, son of a Pratunam-based clothing retailer, at 1.30am on Friday morning after victim Jaroon Maneephan died at 10.40pm on Thursday, said Huai Kwang superintendent Pol Colonel Kampol Rattanapratheep. The charge carries a sentence of imprisonment for 3-15 years.

Narathorn – who denied the new charge as police are still waiting for a medical report to confirm the death’s link to the assault – was brought to court on Friday for a court order for the first 12-day detention period.

The suspect’s girlfriend, identified only as May, later on Friday afternoon secured Narathorn’s release on bail with a 180,000 baht cash deposit. She said they would attend Jaroon’s funeral in Ayutthaya’s Bang Sai district. The bail was granted by a court judge despite police arguments that the offence carries a heavy punishment and there was a risk Narathorn might flee.

Jaroon, who was said to be healthy from riding a tricycle while scavenging, became bed-ridden at home for 14 days following his hospital treatment for the serious injuries sustained from the assault. Narathorn reportedly negotiated to pay the family compensation by monthly installments of 3,000 baht.

Jaroon, who suffered from bedsores, was rushed to Rajavithi Hospital with a high fever on Thursday afternoon. His condition worsened and he stopped breathing.

Medical staff worked unsuccessfully for 30 minutes to resuscitate him before pronouncing him dead at 10.40pm. Jaroon’s younger sister 65 year old Boonreun Thepphuthorn said she wanted police to proceed with legal actions against Narathorn over the death of her eldest brother. Jaroon had seven siblings. 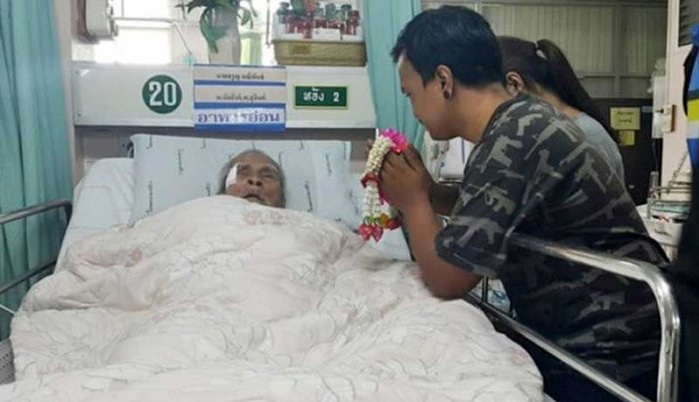