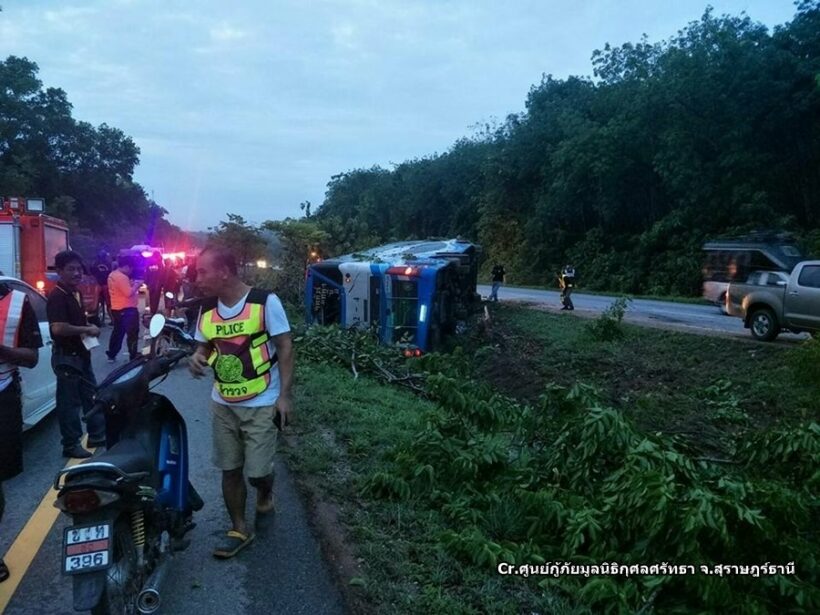 A Bangkok – Khanom bus has ran off Highway 41 and crashed into a tree alongside the road injuring about 20 passengers this morning (Monday). (UPDATE: 19 confirmed injured)

Thai PBS reports that the bus was heading from Bangkok on the way to Nakhon Si Thammarat with 36 passengers when it ran off the highway in Chaya district of Surat Thani at 5am. The bus crashed into a tree by the roadside and flipped over.

All injured passengers were admitted to the Chaiya and Thachana hospitals for treatment.

The 55 year old Bus driver, Somsak Jailing, claims a 10-wheeler truck cut in his right lane too close in overtaking his bus, forcing him to swerve to avoid hitting it. The bus then ran into the roadside ditch before striking a tree and flipping over.

But highway police claim the bus’s GPS tracking system indicates he drove over the speed limit twice before the incident. They’re preliminary investigation also found no tyre traces indicating the driver had applied the brakes before it went off the road.

Police are continuing their investigation over the incident.