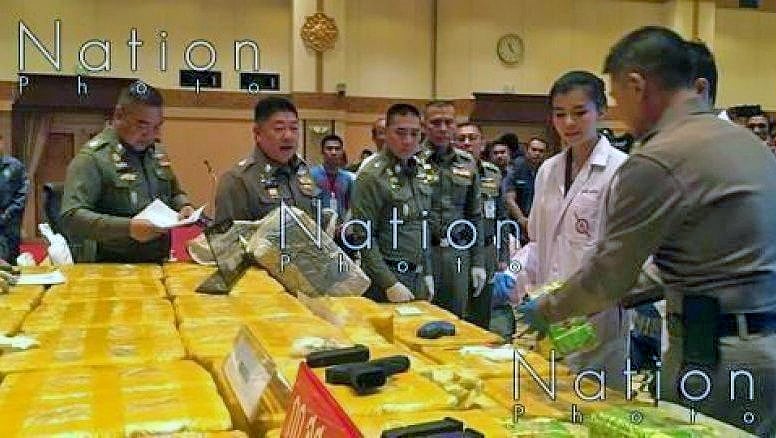 Bangkok police have arrested six suspects and seized a large drug haul of 10 million made-in-Myanmar methamphetamine pills and 398 kilograms of crystal methamphetamine or “ice”. A haul that size led the national police chief, Pol General Chakthip Chaijinda, to hold a press conference this morning (Friday) at the Royal Thai Police headquarters to announce the seizure.

Chakthip said police made the arrests after investigators from the Metropolitan Police Bureau’s Division 8 monitored the group on suspicion that they have been distributing drugs in Bangkok’s Jom Thong district.

Chakthip said police officers monitoring the group observed the suspects driving a convoy of four vehicles to Ayutthaya on Thursday and later driving back to Bangkok. When a Chevrolet sedan and a Toyota Fortuner were driven into the soi, police stopped them and found the drugs. Another team of police arrested additional suspects in the two other vehicles.

Chakthip said police found that the drugs were smuggled from a Wa ethnic group in Myanmar’s Shan State through a northern province. The group co-controls a massive drug-producing region and has a history of smuggling drugs to Ayutthaya, Nonthaburi and Pathum Thani before then moving the shipments to Bangkok for distribution or on to Malaysia.

Chakthip said the group was planning to smuggle the drugs to an agent in the South.

The six suspects were just couriers, the national chief said, but police have already learned the identity of the boss. The boss is Thai, he said, but withheld further details over fear that the case would be affected.

Chinese delegation visit Patong lifeguards and had some suggestions too