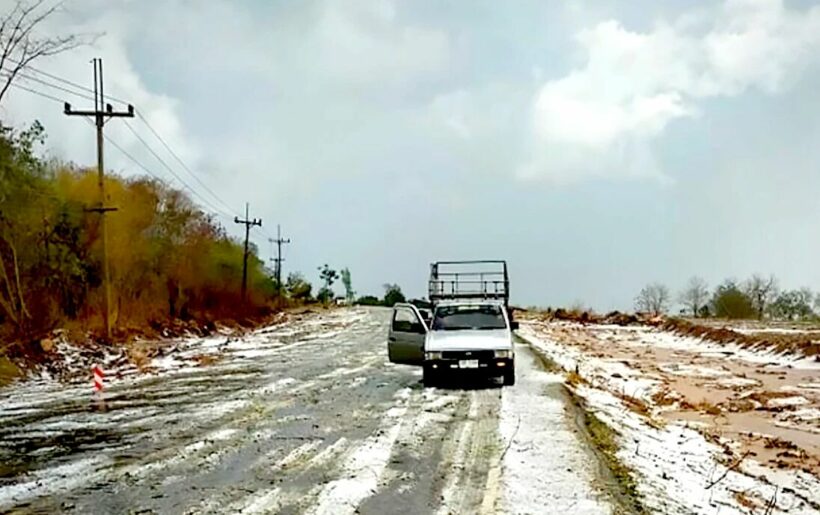 PHOTO: Storms in Phayao create a snowy appearance. (via Nation)

“When it snows in Thailand” sounds like an alternative version of “when pigs fly”, a snappy way to say that something will never happen. But, photos in the Phu Kamyao district in the Phayao province in Northern Thailand show a thin layer of snow-like ice on the roads after heavy storms.

The province sits on the Laos border and includes mountainous regions and cooler weather. On Wednesday, storms turned extra chilly as the rain water froze and the area was pelted with a flurry of hail not often seen in Thailand. As a result, the icy remains of the hail that crashed into the ground formed a dust cover that looked like a light powder of snow.

Photos of that rarity in Thailand have gone viral on Thai social media yesterday, with people commenting that it looks more like a Hollywood set than a place in Thailand. But others think the sight, while beautiful and unique, is a sign of a much darker problem – the effects of climate change making Thailand’s already volatile weather that much more extreme and unpredictable.

Locals reported that the storms have brought dangerous conditions. Roads are slick and icy, but also the force of the storm took down a power pole and a tree in the area nearby, blocking a road while locals wait for authorities to remove the tree and repair the power line.

Warnings have been issued by the Thailand Meteorological Department about the possibility of hailstorms, along with strong winds and thundershowers through upper Central and Northern Thailand. A westerly trough is moving through the region now, bringing heavy storms.

The department warned people outside in the storms to practice caution due to the strong weather and possible debris. They called for people to stay inside if possible and to avoid risky objects like large trees or unsecured billboards.