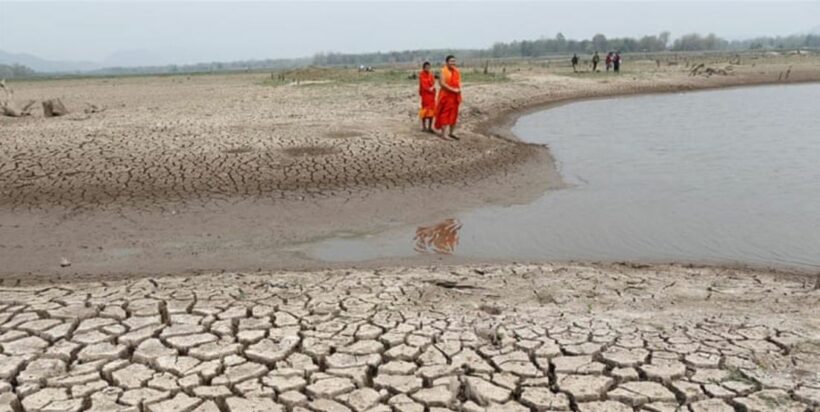 Thailand’s water situation is becoming critical with eight provinces now listed as critical. Officials are now describing the situation as the worst drought in 50 years.

PM General Prayut Chan-o-cha has allocated 1 billion baht to finance the expansion of local water bodies in drought-hit provinces. The lack of rain has left as many as 17 major dams in the country almost empty.

• Five districts in Nakhon Ratchasima – Phimai, Chum Phuang, Non Daeng, Non Sung and Prathai – have been suffering drought for nearly three months now with paddy fields abandoned due to the lack of water. Locals are also struggling to find water to survive as their taps have dried up.

All reservoirs in the province are almost empty, especially Phimai dam, and if there isn’t any rain in the next week, all crops will die.

• Khon Kaen province is urgently pumping water into 1,000 rai of drought-hit fields. Khon Kaen governor Somsak Chungtragoon said he is working with related agencies to follow up on the installation of pumps to push water from a local water basin to monkey cheeks nearby, so water can be pumped to irrigate crops in neighbouring areas.

• Farmers from Phichit are calling on the Kamphaeng Phet irrigation office to pump water from Ping River to 30,000 rai of their paddy fields which are slowly dying because the local rubber weir has been damaged and cannot store enough water.

Drought in Phichit, north-central Thailand, has become severe especially in areas upstream of the Yom River, because the Sam Ngam rubber weir was damaged five years ago, reducing its ability to store enough water.

• In Phuket the three major catchments are currently less than 10% of their full capacity and urgent rain is now needed in the remaining half of the wet season to avert a major water crisis for the forthcoming tourist high season.

• Irrigation authorities in Chiang Mai province say 3.9 million cubic metres of water will be reserved to ensure taps do not dry up.

• In Lop Buri, the Pa Sak Jolasid Dam reservoir has dropped dangerously low, to only 4% of capacity, even lower than it was four years ago when the central province withered in the grip of severe drought.

• In Nan in the North, millions of worms have infested 47,000 acres of cornfields spanning all 15 districts, more than half the province’s land devoted to corn.

• In Nong Khai in the North-east, the Mekong River is running too low to catch any fish. The level is more than 10 metres below the top of the bank on the Thai side.

• The Kwang Noi Dam in Phitsanulok currently holds 134 million millimetres of water, 14% of its capacity. One of four major dams designated for dispensing water for public consumption, it is able to release just 10% of what it normally shares.

But some good news in Ubon Ratchathani, also in the North-east, where a significant amount of rain fell on Tuesday, credited to cloud-seeding operations. An Ubon farmer said his rice had narrowly escaped devastation in what he called the most severe drought he’d ever seen.