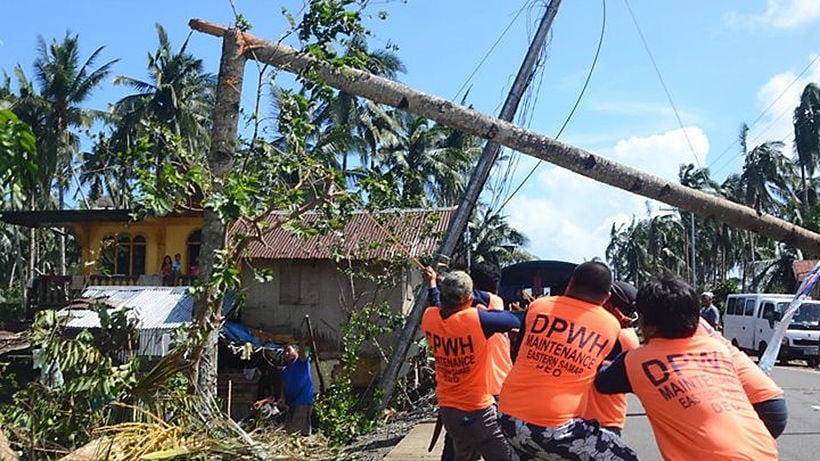 A deadly Christmas typhoon has swept across the central Philippines region, leaving a trail of destruction in its wake and killing at least 21 people. With much of the area’s communications remain cut off, the full extent of the damage or fatalities is not yet known. Typhoon Phanfone, known locally as Typhoon Ursula, made landfall on Eastern Samar province in the Philippines on Tuesday, with heavy rain and storm surges flooding coastal communities. It had the equivalent strength of a Category 1 hurricane, packing sustained wind speeds of 150 kilometres per hour

AFP reports that the typhoon struck busy tourist locations such as Boracay and Coron on Christmas Day, as well as more remote villages. Roofs were ripped off properties and the winds knocked down electrical poles. One falling pole electrocuted and killed a police officer.

Jung Byung Joon, a Korean tourist stuck at the badly damaged Kalibo airport, which serves Boracay, says roads remain blocked, with a lot of passengers stranded due to cancelled flights, yet unable to leave the airport due to strong winds and heavy rain. Mobile phone and internet services on the holiday island of Boracay was cut during the storm as it passed through on Christmas day; the networks remained down on Thursday.

“Roads remain blocked, but some efforts have been made to clear away the damage. It’s pretty bad. Everything within 100 metres of the airport looks broken. There are a lot of frustrated people at the airport as flights have been cancelled. Taxis are still running but it’s windy and still raining so no one wants to leave the airport, including me.” – Jung Byung Joon/Instagram

The typhoon has ruined the Christmas holiday in the strongly Catholic country, with tens of thousands having to leave their homes and others unable to complete their journeys to family and friends due to transport services being cancelled.

The Philippines experiences about 20 serious storms every year, with the entire archipelago facing the Pacific typhoon belt. Typhoons regularly destroy homes and other infrastructure, as well as ruining harvests, leaving many of the country’s farming communities stuck in a state of permanent poverty.

Phanfone followed a similar path to 2013’s much stronger Super Typhoon Haiyan, which left more than 7,300 people dead or missing in the region.