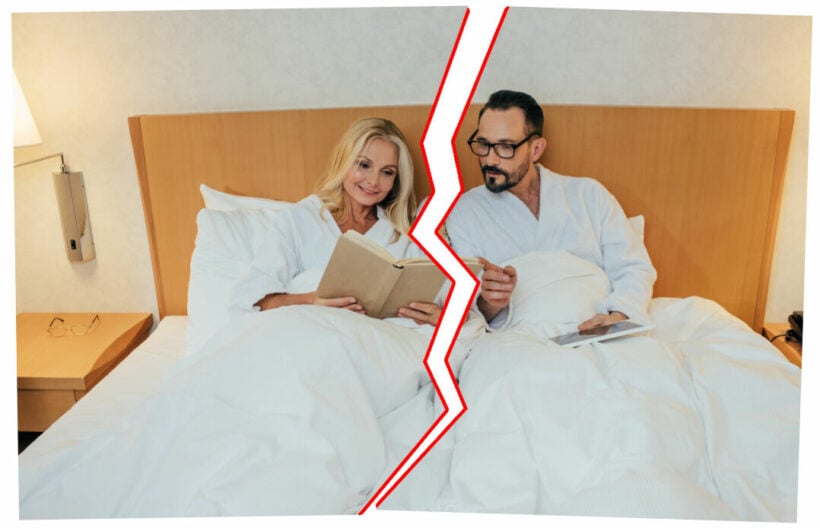 PHOTO: Whether or not couples can share a hotel room in the Phuket Sandbox is a bit murky. (via Depositphotos.com)

In an attempt to clarify without actually clarifying the issue, the Phuket Tourist Association was compelled to release a follow-up statement in response to an off-the-cuff remark by an official that implied that only legally married couples could share a room in the Phuket Sandbox rollout.

During a Zoom meeting with the Association of Thai Travel Agents the subject came up that perhaps international travellers in their SHA Plus certified hotels might wish to have visitors or, ahem, overnight local guests. The president of the Phuket Tourist Association, Bhummikitti Raktaengam, made a comment suggesting that maybe only married couples could share a hotel room during the 2 week island quarantine period.

Bhummikitti Raktaengam has been the mastermind behind the Phuket Sandbox project, trying to pull the competing forces, locally and nationally, together to create a way for vaccinated tourists to re-enter the country. Latterly he’s become more of a fixer, as the initial Sandbox plan became compounded with an increasingly long list of restrictions, rather than the original tourist-friendly invitation back to Thailand.

But back to who can stay with you during the 14 day stay on the island….

The Phuket Tourist Association put out a follow-up statement which didn’t seem to clear up much. Their statement mentioned Bhummikitti’s comment and said it was referring to the situation of a tourist wishing to spend the night with a local Thai person.

It then flatly stated the two people must be a married couple. The statement said bluntly that friends, unmarried couples, or “a person who is hired to entertain” would not be allowed to share a room.

Seemingly a definitive answer that only married couples could share a hotel room, the position was further muddied by the statement continuing, explaining the president was only referencing standard Thai law that needs to be considered, and that people wondering the answer to this question that could potentially double the cost of a couple’s stay in Phuket should wait for the official legal announcement for clarification.

“We would like to clarify that the sentence was misunderstood because Mr Bhummikitti explained that the stay together between foreign tourists and Thais can be done under the framework of law, which needs to be considered again. To not make any possible confusion, please wait for the clarity from the announcement by the Royal Gazette.”

Make sense? No? Don’t worry, the back and forth continued as Bhummikitti then took to Facebook to “clarify” his statements. He seemed to say that his statement on the subject was merely an expression of his own opinion and nothing to be taken as official. He apologized for any “discomfort” caused by his words and vowed to be more careful when speaking.

But his Facebook post also pointed at his positions irrelevance as the Phuket Tourist Association has no authority to set the rules and conditions of the Sandbox accommodations. He stressed the PTA was a private organisation not involved in creating the rules and urged people to wait for the proper officials to address the issue.

If you are still confused, he offered this crystal clear explanations of whether unmarried people could share a room.

“The law should allow [people] to do things under the framework, such as those who had a marriage certificate. For other cases, it needs to be considered by relevant officials.”

ThaiFoodGuy
My apologies if this has already been answered, but what happened to the GPS wristbands?

bushav8r
On 6/26/2021 at 1:37 AM, KaptainRob said: @Stonker - your post makes good sense and highlights the stupidity of officials even opening their mouths on subjects when they have no correct advice to offer.  Unfortunately the Thai way is often, speak…

bushav8r
4 minutes ago, JamesE said: And the microchips on the airport PCR test swabs communicating with the nanobots in the required vaccines. Don't forget 5G.  It will be used to trigger those nanobots and turn us all into zombies.