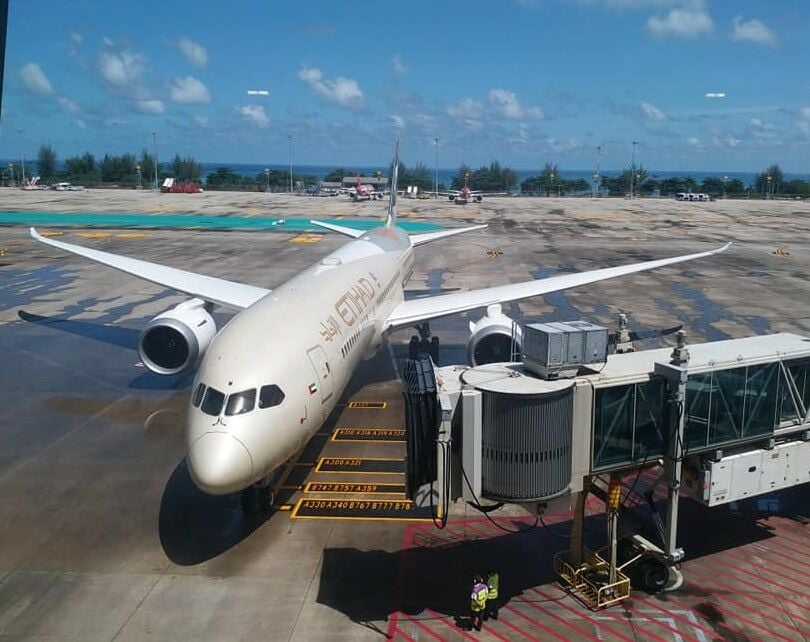 The first 3 flights have now arrived in Phuket for the Sandbox reopening, with details emerging from the first arrival this morning, an Etihad Airways flight from Abu Dhabi. A total of 25 passengers, down from yesterday’s estimate of 37, were the first to be welcomed back to Phuket with fanfare and celebration. A total of 400 international travellers are expected by the end of the day.

Airports of Thailand officials followed an old tradition of spraying the first arriving flight of new service to an airport with a water cannon as a welcoming gesture. Not to be outdone, Etihad Airways followed a long-standing tradition that more of us are familiar with as the flight scheduled to arrive in Phuket at 10:20 am actually landed 40 minutes late at 11 am.

Phuket province’s new international guests were welcomed before being whisked off their flight and through document checks to confirm they have been vaccinated, had booked at least 14 nights in an SHA Plus certified hotel, had US $100,000 Covid-19 health insurance coverage, and met all the other requirements. Their temperatures were checked before being led to standard customs and immigration clearance, after which they were swabbed for Covid-19 testing.

The atmosphere was said to be cheerful at the airport with a number of souvenir shops reopening for the first arriving international travellers. One notable absence from the welcoming committee though was PM Prayut Chan-o-cha who was expected to be on hand to welcome the first guests. Officials noted he is now scheduled to welcome the flight arriving from Singapore in the late afternoon.

Phuket International Airport had less than 2 hours before the second flight arrival, Qatar Airways Flight QR840 that left at 1:38 am from Doha, arrived 44 minutes behind schedule at 12:49 pm. That flight was said to have 136 passengers, 20 more than yesterday’s expectation, with total numbers not yet confirmed. The next Qatar Airways flight is scheduled for similar times tomorrow.

El Al flight LY87 left Tel Aviv Israel last night at 10:44 pm and has now been confirmed to have arrived at 1:57 pm at Phuket International Airport. It was scheduled to arrive at 1:45 pm with 137 passengers, 36 more than yesterday’s predictions, though the total final number has not been confirmed.

Next, Singapore Airways flight SQ736 is scheduled to arrive this late afternoon at 5:10 pm with approximately 100 international travellers onboard. The most updated schedule has the flight departing Singapore at 4:20 pm and arriving at 5 pm in Phuket. Yesterday it was estimated to be carrying 47 passengers but today that prediction has been increased to 100.

A previously reported hopper flight on Etihad Airways from Bangkok to Phuket is now said in the latest reporting to not be arriving. But current air traffic scheduling shows an 8:45 pm departure and a 10:20 pm landing in Phuket still planned.

tron
I can see how some business people would go through all of this. Condo prices are down and the baht is down. As a Canadain i could save 50% right now on a place compared to 15 months ago. For…

BlueSphinx
6 hours ago, dimitri said: I am 100% sure that you have to wear a face mask in Spain, even outside on the street. Just like Thailand. The only difference is that fines in Spain are a LOT higher than…

JamesE
1 hour ago, gordo2613 said: all sorts of numbers are being quoted and some are asking how many Thais are on the flights and husbands of Thai women compared to actual tourist. The "real" number of people entering can be…
Joe
Welcome to Jail Phuket! If you have money you can get anything here!
IsaanFan
?I tried to book CoE, 20.06.21. The answertime was maybe 3-5 working days! But not for Phuket Sandbox already... 28+29.06.21 I called Thai Embassy, and they told me : ...waiting time maybe 15 workingdays...but not sure......... So I try in…