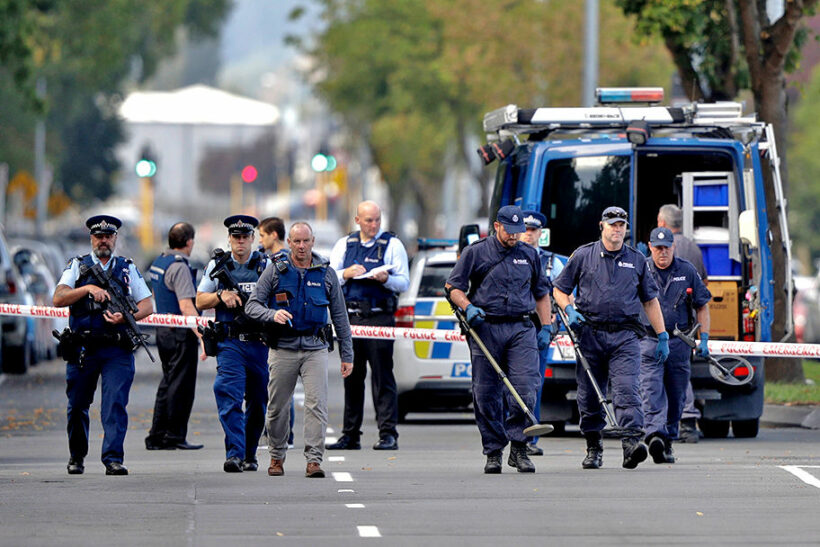 PHOTO: Police officers near the Masjid Al Noor mosque, site of one of the mass shootings at two mosques in Christchurch, New Zealand in March – Associated Press

The world’s largest social media empires led by Facebook say they are ramping up an industry body that will weed out extremist content, looking to put procedures in place globally to grapple with online extremism.

Facebook announced their efforts at the UN during a meeting with New Zealand’s PM Jacinda Ardern, who has taken up the cause of fighting online extremism after last March’s massacre by a white supremacist at two mosques in Christchurch.

“We are trying to create a civil defense-style mechanism. The same way we respond to natural emergencies like fires and floods, we need to be prepared and ready to respond to a crisis like the one we experienced.”

Facebook, Twitter, Microsoft and YouTube in 2017 formed the Global Internet Forum to Counter Terrorism, a vaguely conceived alliance tasked with tackling the most dangerous material on social media.

But tech companies came under renewed criticism after the bloodbath in Christchurch, where the assailant posted a manifesto online and then live-streamed his killing of 51 worshippers.

Appearing with the NZ leader, Facebook’s chief operating officer Sheryl Sandberg said the company took down 1.5 million potential views of the grisly video – at least 1.2 million before anyone had the chance to view them.

“We can’t wait until a moment like this happens again. We need to do the hard work now, to establish the systems and protocols and the cooperations.”

President Emmanuel Macron of France, which has faced challenges combating militants inspired by the Islamic State movement, has teamed up with Ardern on the so-called “Christchurch Call.”

He co-chaired a meeting with Ardern on the latest efforts as they both attended the United Nations General Assembly.

Under Monday’s announcement, the Global Internet Forum to Counter Terrorism will be considered an independent body and enjoy a dedicated staff under an executive director.

While the industry will lead the forum’s operating board, non-governmental groups will head an advisory board.

The governments of the US, France, UK, Canada, New Zealand and Japan will also play an advisory role, along with UN and EU experts.

Facebook said that the forum would fund research on how best to prevent incitements to violence online and how to reduce the effects on social media when attacks occur. The forum will still amount to a voluntary effort by tech companies to police themselves. 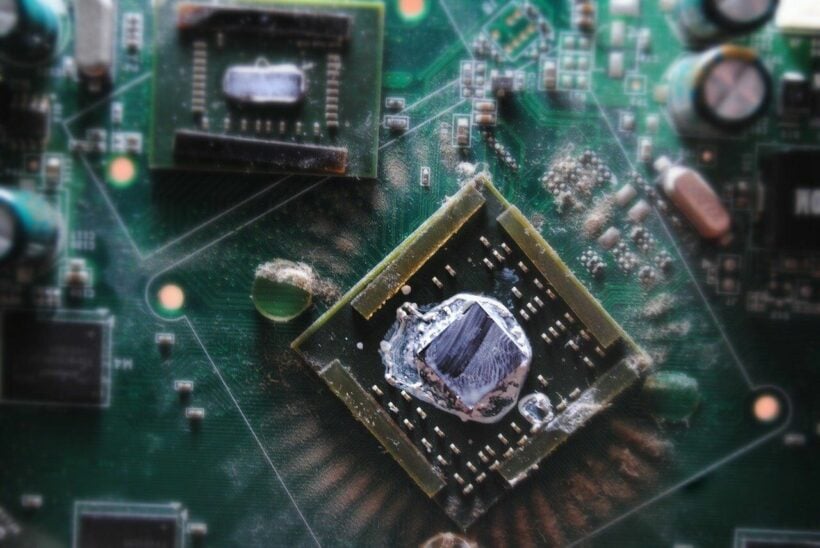 A global chip shortage has affected almost every kind of business from automakers to sex toy makers. The shortage came about late last year when automakers thought demand would dwindle due to the Covid-19 pandemic. But, they were wrong. And, other manufacturers took note of the automakers’ large semiconductor orders and decided to ramp up their own.

Home appliances, servers, sex toys and heavy equipment makers are dealing with the fallout over the shortage of chips, with companies that don’t usually use chips as their core business feeling the effects. The rise in demand in conjunction with the decrease in availability has increased prices and wait times for such goods, with businesses racing to acquire as many chips as they can.

Since the pandemic, forced lockdowns have seen an increase in demand for electronics, as people have taken to working from home and entertaining themselves at home (in more ways than one). The chip shortage has spared few companies with even some tech giants taking to mass buying to protect themselves from the US-China trade war. Microsoft and Apple have said hardware sales were affected by the shortage with tablets and laptops seeing the largest drop in sales.

A recent Goldman Sachs Group Inc. report says semiconductors are an important manufacturing component for 12% of the US gross domestic product.

In Shenzhen, China, Petoneer has suspended sales of some pet gadgets, including a robotic cat toy after its chip supply ran out. A Petoneer sales executive says the company is looking into whether it can swap in types of chips that are more readily available.

Crave, Inc. a sex-toy company is being forced to redesign half of its products this year to adapt to the chip shortage. Its chief executive says a typical sex toy contains 30 different electronic parts, including chips. The company started stockpiling chips late last year as lead times started increasing. The chief executive says they are bracing for at least a year and maybe over 2 years for a shortage.

So, those who were looking for a new and improved way to pleasure themselves, the company says they are working to make sure its products will still be available. 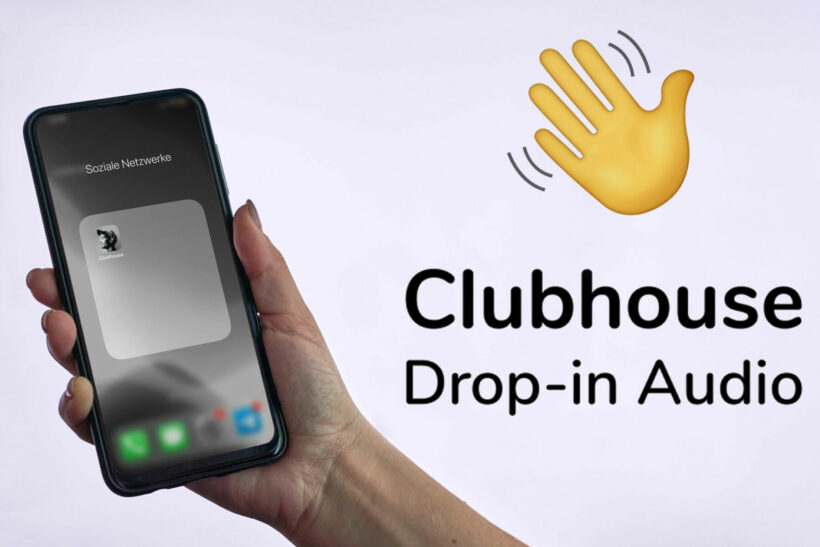 PHOTO: Clubhouse, dissidents move from the street to their phones.

Clubhouse, a popular audio social media app, is attracting political debates, despite the Thai government threatening prosecution under the Computer Crime Act. The law forbids posting against the monarchy or government, but the app creates a perfect channel for government and politicians to directly connect to targeted social groups.

The appeal of the Clubhouse app comes in its exclusivity, as it’s invite-only, and by bringing some humanity to online interactions through the use of voice instead of clicking away at a keyboard. Members create private groups where they can schedule speakers in a virtual room to address their group. These events are live and not archived or rewatchable, thus adding to the immediacy and exclusivity of Clubhouse activity.

In February, a user named Tony Woodsome invited users to a chatroom on the Clubhouse app called “Those who were born during (the) Thai Rak Thai Party’s era come join here”. The speech attracted 30,000 listeners, who attended in rebroadcasting virtual rooms to sidestep Clubhouse’s 5,000-user limit per room. Tony lectured on human rights, the protests by younger Thai people over the last year, economic recovery and the government’s lack of support for start-ups and small and medium enterprises.

But Tony was not your average activist. He was revealed to be Thaksin Shinawatra, the former prime minister ousted in Thailand’s 2006 coup. The self-exiled leader hadn’t spoken out to his followers for a year before he surfaced on the app in this Clubhouse meeting.

Thaksin is one of many politicians, academics and celebrities using the Clubhouse app to connect directly with fans and discuss topics that may be taboo elsewhere. The current Minister of Public Health uses the platform, as well as the leader of the Kla Party, founders of the Future Forward Party, and Thai monarchy critic Pavin Chachavalpongpun.

Prime Minister Prayut Chan-o-cha has yet to make the leap and try communicating with the Thai people through the Clubhouse app as other leaders like South Korea’s prime minister. Some see it as an opportunity for PM Prayut to engage civilly with opponents, but others worry that connecting with these young activists hasn’t been Prayut’s strong point, and flubs in Clubhouse could do more harm than potential good.

With its privacy and lack of recorded proof, the Clubhouse app has become an outpost of free speech, and a thorn in the government’s side, with people often able to speak out against the monarchy. Officials have threatened legal action for violating Thailand’s strict lese majeste laws by smearing or distorting the monarchy or government. They cite the Computer Crime Act, designed to prosecute bad-mouthers on Facebook, Instagram, Twitter, YouTube, and now Clubhouse. So far, many of the government’s threats have gone unheeded and have not discouraged users from speaking out.

Clubhouse has functioned as a mediator and an equaliser, both allowing people of opposing viewpoints to have an unrestricted dialogue, as well as allowing average citizens that previously could only listen to lectures to have a 2-way conversation with powerful and elite people.

Participating in discussion and anti-government conversations on one’s mobile phone is much safer than the demonstrations in the streets that have pestered the government for nearly a year and allows activists to connect with the young generation of Thai people through their phone. The Clubhouse app is currently for iPhones only, but an Android app is expected this summer, broadening its reach considerably. 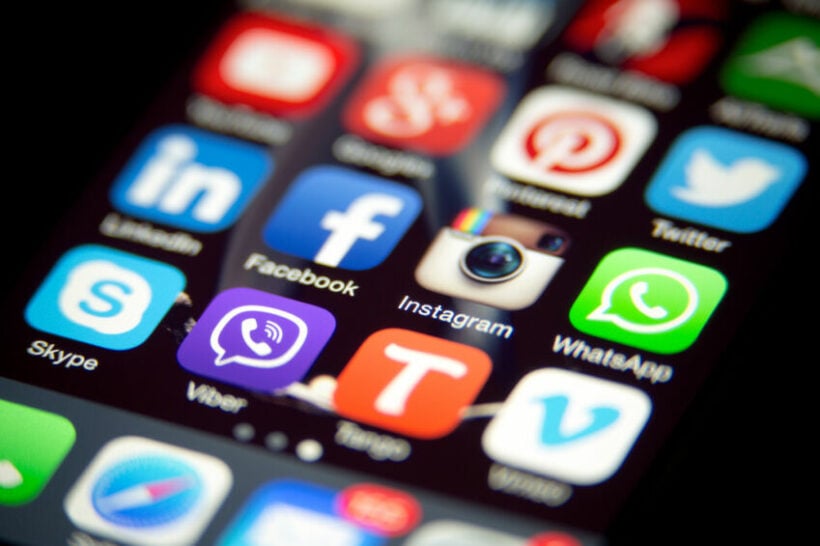 Apps have changed the way we do a lot of daily, ordinary, tasks. Living in Thailand ,we have bench tested a range of apps and decided on the Top 10 most useful apps currently available, most of them are free, or have a free version. So many previously complicated or time-consuming tasks are now so much simpler, and sitting in the palm of our hands.

When it comes to translating, ordering food, booking a flight or transferring money, we can do it in seconds thanks to these great apps.

Michael Kenner is The Thaiger’s app-ologist, an enthusiastic user of many apps and has road tested many of them to come up with his final list of ten most useful apps for people living in, or travelling to, Thailand.

Some quick links to some of the apps mentioned…