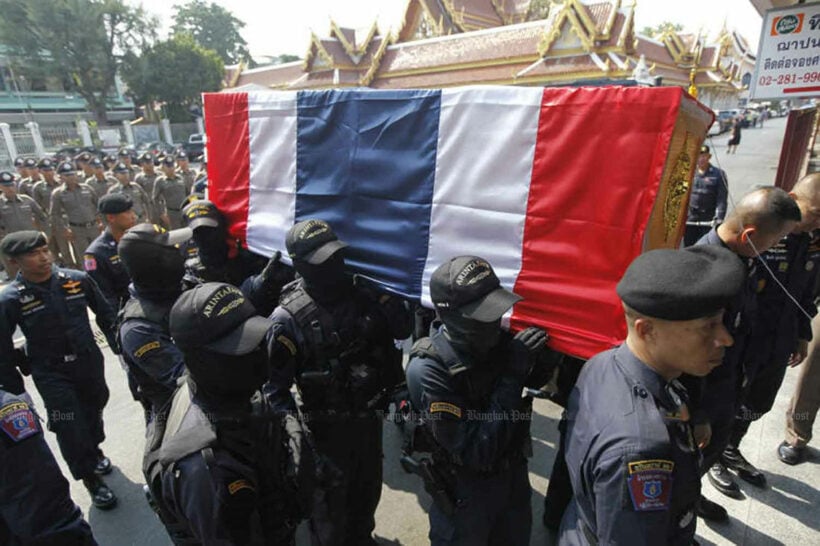 The two policemen who died ending the shooting rampage in the northeastern province of Nakhon Ratchasima were honourably received in a royally sponsored bathing ceremony in Bangkok yesterday.

The bodies of  Captain Trakul Tha-asa and Senior Sergeant Major Petcharat Kamchadpai, both 35 years old, were transported on ceremonial trucks from Nakhon Ratchasima to Bangkok, their coffins covered with the national flag. Senior officers and guards honoured them in a ceremony. Later the bodies were moved to their home towns for funerals.

National police chief Chakthip Chaijinda praised all of the anti-terrorism officers assigned to end the shooting rampage at Terminal 21 mall in Korat, central Nakhon Ratchasima. He commended their dedication and willingness to sacrifice their lives to protect the innocent, as the shooter used military weapons capable of penetrating body armour.

Trakul and Petcharat were anti-terrorism officers of the Metropolitan Police Bureau. Their families will initially receive compensation of about 2.5 million baht each.

Last night, PM Prayut Chan-o-cha announced that Their Majesties the King and Queen expressed condolences and offered moral support to the families of victims. Their Majesties also sponsored the funerals of those killed, sent representatives to visit the families and supported people cleaning up the scenes of the incident.

Korat Massacre – Did police use a drone to find the gunman?