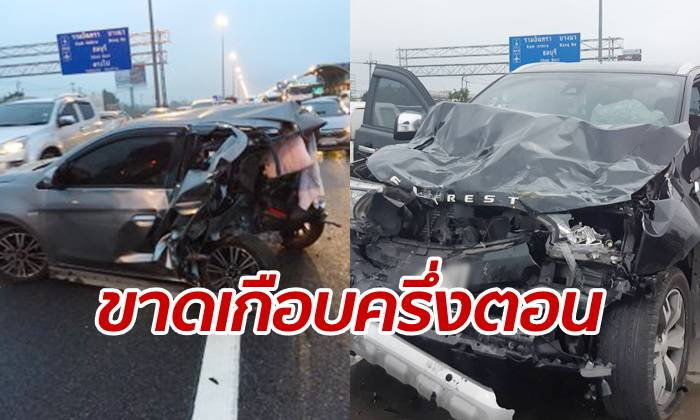 Police in Bangkok are looking for the driver of a Ford Everest who jumped over a wall and fled the scene after colliding with a Mitsubishi Mirage, killing two people.

Witnesses told police that the collision happened when the driver of the black SUV was trying to pass on the left-hand shoulder of the road. According to Sanook.com, the Mirage sedan had almost half of its rear section torn off with the force of the collision.

Two people were pronounced dead at the scene in the Lam Lukka area of the Kanchanaphisek ring road, north of the main Bangkok city centre.

Witnesses told police that the driver of the Ford Everest jumped over a wall and fled the scene. Police say they know the identity of the owner of the SUV’s registration and are currently searching for him.

Police say they are unsure if the two people killed were in or out of their car at the time of the collision, or what they were doing when they were killed. Their bodies were found some distance away from the wreckage on a grassy patch next to the road.