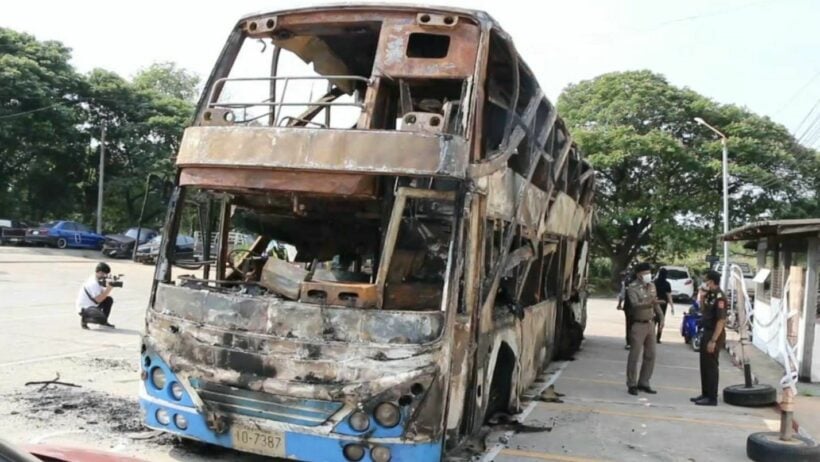 FILE PHOTO: The charred remains of the bus that burst into flames late Monday night.

After yesterday’s horrific bus fire left 5 dead and 12 injured, the driver is now charged with reckless driving causing deaths and injuries. The tour bus ended up in flames at 12:30 am, not long after leaving the Khon Kaen bus terminal heading to Bangkok with 33 passengers on board. The bus had originated in Bung Kan and stopped in Udon Thani to add more passengers before stopping in Khon Kaen. The driver reported hearing a sound he thought was a rear tyre exploding right before the wheel caught fire. The blaze reached the engine compartment and from there quickly spread to engulf the entire bus.

The 48 year old driver, Patsadee Kham-on from the Isan province of Maha Sarakham, was burned in the bus fire accident as well. He remains in custody today after being escorted to Khon Kaen Court for a judge to approve his detainment pending further investigation. Police are advocating that bail be refused for the driver.

Among the victims in this crash were a 21 year old man from Sakon Nakhon, as well as a 23 year old woman from Bung Kan and 2 women from Udon Thani. One woman was 28 years old while the younger woman, 23 years old, was travelling with her 6 year old daughter who was also killed in the crash. Police advised that relatives could collect the victim’s bodies at Srinagarind Hospital’s forensic medicine department. They also directed families of the victims to the Ban Haet police station to gather documentation for claiming compensation. Procedures have started by the Office of the Insurance Commission to examine the accident and charred bus and to determine compensation.

The cause of the bus fire has not been officially determined and experts from the Land Transport Department have a pending examination. While investigations continue, compensations from insurance is expected to be 1.5 million baht per death, plus an additional half a million baht as part of the Road Accident Victim Protection Act of 1992. The bus belongs to 407 Pattana Company, and was carrying insurance issued by Viriyah Insurance Plc.