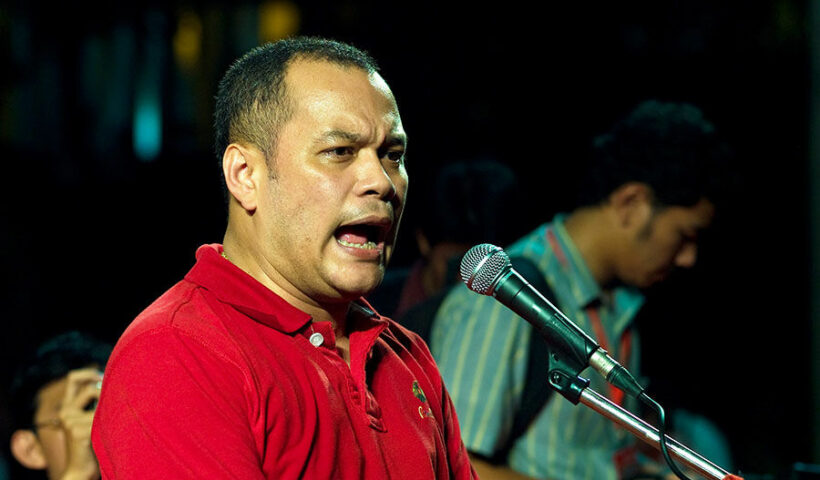 The government is seeking to press charges against red-shirt leader Nattawut Saikuar over protests in Bangkok on Sunday. According to a Bangkok Post report, Seksakol Atthawong from the office of PM Prayut Chan-o-cha, has confirmed that a complaint has been lodged with the Crime Suppression Division. Nattawut is accused of sedition and of violating the emergency decree and the disease prevention law, after encouraging protesters to join Sunday’s rally, which ended in violent clashes between participants and the police.

Seksakol also alleges that Nattawut had been planning to instigate unrest, pointing out that he had called on protesters to join anti-government rallies, despite knowing that recent protests had resulted in violence. The Bangkok Post reports that the Anti-Money Laundering Office has been asked to investigate Nattawut’s financial history since 2010, with Seksakol saying he suspects the anti-government protests are being sponsored by overseas parties.

On Sunday, anti-government protests clashed with police at the Din Daeng intersection in the capital. Media reports say activists hurled bricks and large firecrackers at police, who responded with water cannon and teargas. According to Piya Tawichai from the Metropolitan Police Bureau, 5 protesters were arrested on Sunday, 17 police officers were injured, and 18 government vehicles were damaged. Piya has apologised to local residents affected by the use of teargas and rubber bullets as crowd control officers attempted to drive protesters back.

Meanwhile, it’s understood that a young protester who was shot in the neck by police remains in critical condition.

D2B2
I would assume the Prime Minister’s office has more pressing and important matters to attend to presently, but obviously not.