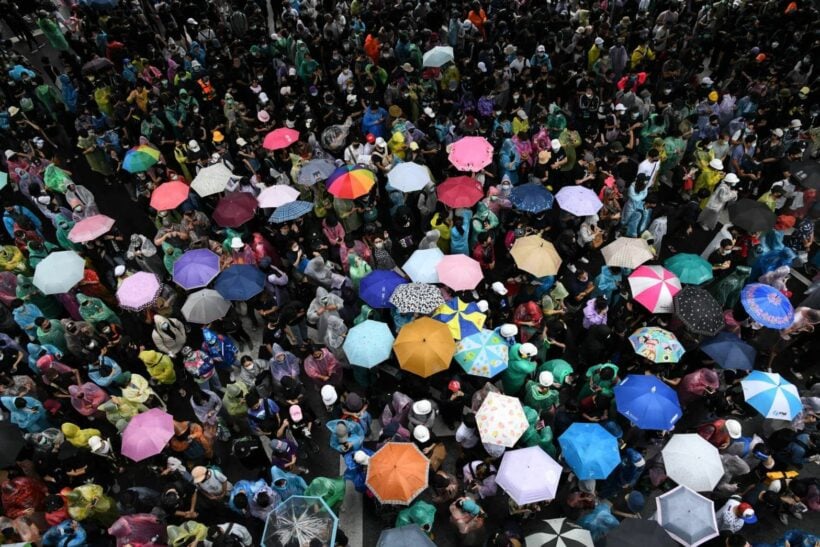 The Thai Government has no easy way out of the current protest situation.

Over the past months an organic, mostly young Thais, political movement has been building. It’s different from every protest movement in the past. The people attending the rallies don’t really align themselves or identify with the past political factions. They’re not red shirts or yellow shirts. They are new and say they’re seeking key changes to Thailand’s political system, and the role and powers of the Head of State.

Their demands – the standing down of the Thai PM Prayut Chan-o-cha, the dissolution of the Thai parliament, a new constitution to replace the 2017 Thai Charter and curbs on the powers of the Thai monarch – are unlikely to be met by the current government.

The protester’s 10-point manifesto, outlining their demands, pits them against a quasi-democratic government that includes many of the faces from its predecessor, the National Council  for Peace and Order that removed the elected Shinawatra government in 2014 in a military coup. The leader of the coup, General Prayut Chan-o-cha, is now the prime minister, elected by a parliamentary majority. The entire upper house of the Thai parliament were hand-picked by the PM and NCPO, so a parliamentary majority is merely a formality.

There is little possibility the ruling government will concede to any of the demands of the protesters. They’re not going to simply step aside and hand over the levers of power to opposition parties. Whilst promising to convene an enquiry into constitutional reform last month, the parliament was unable to get the votes necessary and recommended a postponement. A postponement to an enquiry… blah, blah.

Thai politics has proved to be brutal over the past five decades with countless coups, periods of political instability, violent crackdowns on dissent and a 2017 constitution that guarantees that the status quo can continue, without the usual checks and balances in a modern parliamentary system.

But something else has changed this time.

The protesters are young and proving resilient and clever. There’s also lots of them.

Their defiance to the status quo has shocked the elite establishment. Everything is now being questioned, including the previously revered position of the Thai monarchy.

Just recall scenes over the past week…

• A royal motorcade driving right through the middle of a protest with protesters standing defiantly, metres away from the occupants of the yellow Rolls Royce, displaying the 3 finger symbol and shouting “our taxes”.

• People deciding to remain seated during the playing of the Royal Anthem which precedes all movies in Thailand.

Even the public uttering of demands to change the role of the Head of State in Thailand were unheard of before this August.

Now, the genie is out of the bottle. What has been said cannot be unsaid and the young are now speaking about the issues openly. They’ve been emboldened by a government completely blindsided by the development and not knowing how to react to this new student-based voice. The only reaction has been the usual brute force.

Speaking to a young policeman, off the record, this morning. I asked how the younger members of the Thai police force felt when commanded to crackdown on their fellow young Thais. He said that there was a growing level of “unease” in the police and that it was getting more difficult to put their personal feelings to the side and act on the orders of their superiors.

The key problem now is that the young protesters face the Thai government and Army who are not adept at the skills of politics or negotiation. Chalk and cheese. Their upbringings are different, their experiences are different. The young say their seeking democratic reform. The establishment are trying to protest the status quo and the privileges they enjoy.

There is little room for negotiation.

The only way forward for the government will be crackdowns, curfews and brute force, most of which will attract almost universal condemnation from other governments and onlookers.

Simply, and starkly, the government are in a lose/lose situation. There are few ways they can extract a ‘win’ out this situation. To force a brutal crackdown on young, unarmed protesters will make them pariahs in a world of modern civilised governments. To do nothing, and allow the protest movement to fester and grow, will simply push their final demise a bit further down the road.

The only way out, to save face and diffuse the situation, would be to call an election. But with the current parliamentary set-up, the odds are stacked in favour of the current rulers to seize back power, again. Do you really think the Senators will step in to force a new election? Sack the PM? By precipitating the writing of a new constitution they would be effectively doing themselves out of a cushy, paid job. It won’t happen.

Everyone wants a peaceful resolution to this current situation but the stakes are high, and sustainable, realistic solutions are thin on the ground.

The views expressed in this editorial do not necessarily reflect the staff and management of The Thaiger.