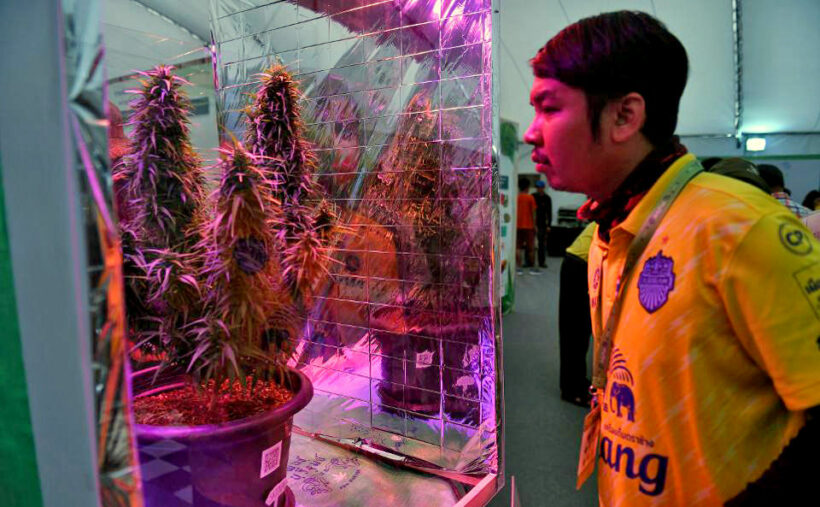 After years of speculation, some members of the coalition Thai government are pushing efforts to allow Thais to grow up to six cannabis plants for sale to the government for medical marijuana. Health Minister Anutin Charnvirakul said he is pushing for the Government to change laws to allow the medical use of marijuana freely.

“We have confidence that marijuana will be among the major agricultural products for Thai households. We are speeding up the changes. But there is a process.”

In September, Anutin hinted that… “In the near future, families will be able to plant cannabis in their back gardens like any other herb.”

Thailand has built what the government describes as the largest, industrial scale medical marijuana facility in Southeast Asia.

In September, Maejo University researchers planted 12,000 marijuana seedlings in Chiang Mai while officials watched. They expect the plants will produce medical marijuana within six months, according to the Asia Times.

“The university will be a centre where ordinary people can learn how to plant and grow good quality cannabis. Cannabis is not political; it’s a product that can benefit people’s health,” according to Anutin.

While claiming cannabis is not a political issue, he caused a stir before Thailand’s general election in March, campaigning for legalising of household cultivation. He led his Bhumjaithai party’s campaign by promising each household could cultivate six marijuana plants. The Bhumjaithai party is now a vital part of the ruling coalition – without their votes the Palang Pracharat party would have not been able to form a government.

Anutin told voters before the election that the sale of each mature plant could earn up to 2,225 US dollars. A household could earn 13,350 dollars for selling six plants. An alluring thought, considering the average annual Thai salary is reportedly 8,200 dollars (24,000 baht per month) annually .

But experts caution that not every plant will produce medical grade cannabis, and the ones that do are hard to cultivate. Amateur cultivators might produce low grade plants, but without tending to the plants and investing nutrients and proper lighting equipment, the flowers produced might not qualify for medical use, purchasable by the government.

Anutin predicts fully legalised marijuana could be a more lucrative crop than rice, sugarcane, tapioca or rubber in the kingdom’s mostly agrarian economy.

Anutin believes Thailand could gain a competitive advantage by creating niche strains for export. Recreational cannabis remains illegal in the kingdom, with punishments including imprisonment.