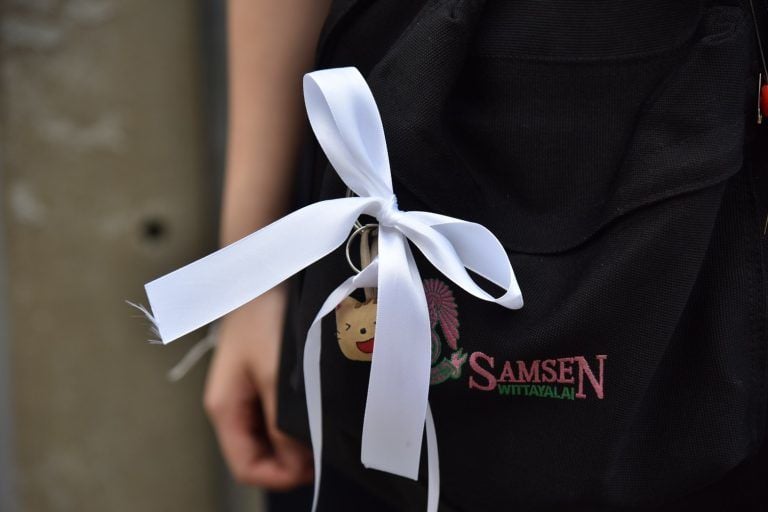 The so-called “Bad Student” activist group says they’ll rally in front of the Ministry of Education building this evening. Activists say the ministry, particularly minister Nataphol Teepsuwan, has not defended the students’ right to protest. Some students were harassed by teachers and administrators for taking part in a demonstration.

Earlier this week, students at various high schools protested during their morning flag ceremony by raising their hands in a 3-finger salute, an anti-government symbol, and by wearing white ribbons. Police were called in by some administrators and confiscated the ribbons. Some teachers took the ribbons and tied them around students’ necks, Khaosod reports. A teacher even slapped a student on the head.

Student’s say the education minister did nothing to condemn the harassment student protesters faced by teachers, administrators and police. They plan to rally at 4pm today. Teepsuwan says he has a meeting, but will try to come back to the ministry office to listen to the protesters.

“I don’t have a problem with them coming.”

Teepsuwan slipped in a warning to students during an education forum, saying that if students break the law during a protest, they can be arrested on school grounds. He added that students should refrain from using disrespectful gestures. The warning comes from experience. In 2014, Teepsuwan was arrested as a protest leader for the People’s Democratic Reform Committee.