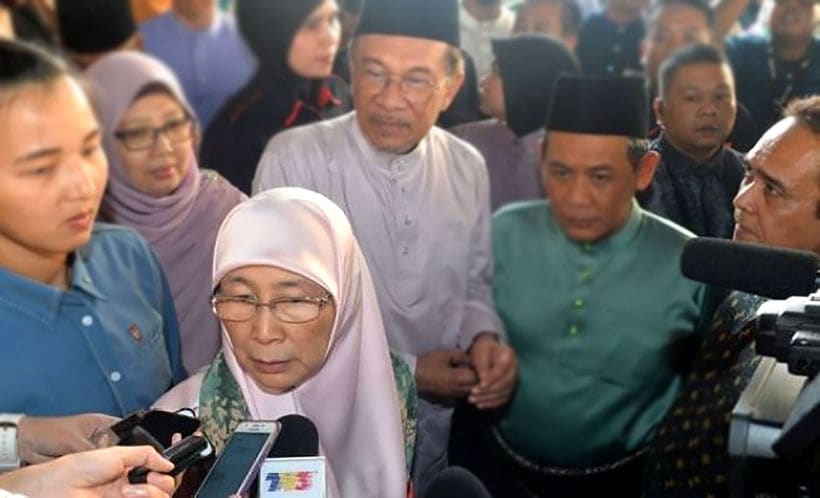 She said she rejected any practice of gutter politics as she had experienced it before.

“I reject ‘gutter politics’ because I have been through it and I sympathise with Azmin’s family,” she said when commenting on the confession by Santubong PKR Youth chief Haziq Abdullah Abdul Aziz that it was him in the sex video with, as he claimed, Malaysia’s Economic Affairs Minister.

In his online confession he alleged that Azmin was the other man in the video, but the minister has categorically denied the allegation. In several videos released since the first allegations, the faces of the two men are quite clearly identified.

The Malaysian deputy PM stressed that there was no place for dirty politics as all parties needed to focus on developing the country.

“We Malaysians have to think more about everything because we want to develop our country,” she told reporters after the Aidilfitri open house hosted by her husband Datuk Seri Anwar Ibrahim.

Meanwhile Anwar Ibrahim quashed rumours that his faction is behind a plot to topple Datuk Seri Azmin Ali by releasing video clips allegedly showing homosexual acts between his deputy and another party man.

The Port Dickson MP said there was no reason for him or his supporters to be involved in such a despicable act.

“There is already an attempt to slander one person and the reason why that happened cannot be justified by another slander.

“What’s the reason for us to do such a thing? Some say it was due to threat, what threat?” said Anwar, who is PKR president.

Anwar served as the Deputy PM of Malaysia from 1993 to 1998 and Finance Minister from 1991 to 1998 when he was a member of UMNO, the major party in the ruling Barisan Nasional coalition. However, he was removed from his post by then Prime Minister Mahathir Mohamad (who is currently Malaysia’s PM) and jailed in April 1999.

His prosecution was criticised by human rights groups and several foreign governments, including the US, UK and Australia. Following his release in 2004, Anwar became the leading figure in the opposition and helped coalesce the opposition parties into the Pakatan Rakyat, which contested the 2008 and 2013 general elections.

Anwar began a five-year prison sentence in 2015, after a second sodomy conviction was upheld. Human rights groups again called the conviction politically motivated. However, he received a royal pardon from Sultan Muhammad V, and was released from prison on 16 May 2018.

Porsche smashed up but Malaysian driver escapes injury in Krabi