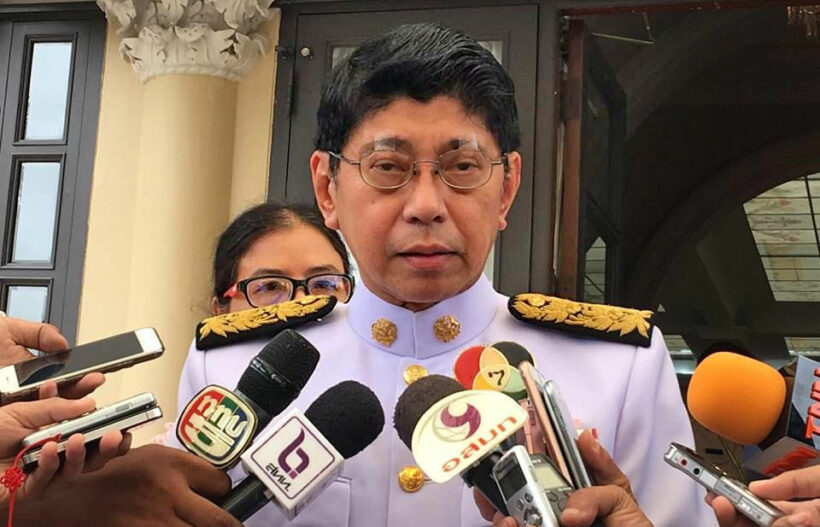 PHOTO: Deputy PM Wissanu Krea-ngam says the MPs voting against the decree was ‘nothing unusual’ – matichon.co.th

70 members of the Future Forward Party have voted against an ’emergency decree’ stating that personnel and operating funds for the Army’s Infantry Division will be put directly under His Majesty the King’s command to provide better security to the Royal Family, Royal residences and the monarch’s VIP guests.

The Parliament’s Lower House passed the decree by 374-70 votes.

Piyabutr had previously stated that the emergency decree might be in violation of the Constitution and that it was the Army’s job to protect the Royal Family.

Meanwhile, Wattana Muangsook, a core member of the Pheu Thai party, said he supported the party’s MPs voting for the Government’s decree, adding that, whether the transfer of troops and funding was done by means of an executive decree because the issue is urgent, or by means of a bill, did not matter because the issue is not about democracy. He believed the transfer will shorten the chain of command and will improve the efficiency of the Royal Security Command.

The US Ambassador to Thailand seems to have quit after only serving less than 1 year in office and moments after President Biden’s inauguration. Michael George DeSombre, who was appointed by President Trump in early 2020, made the announcement of his departure on the embassy’s official social media platform yesterday. A day before, he met with PM Prayut to “thank the Royal Thai Government” as is customary with departing ambassadors. DeSombre succeeded career diplomat Glyn T. Davies.

“It has been a privilege serving as the United States Ambassador to the Kingdom of Thailand. I am exceedingly proud of all we have done to strengthen the US-Thai relationship. I am signing off now from this account and leaving it in the good hands of our Embassy staff.”

Now, as the US Embassy official website names Chargé d’Affaires Michael Heath as its diplomatic mission leader, it is not known when a new ambassador will be chosen by the Biden administration.

Just last year in October, DeSombre wrote, on the same day that President Trump tested positive for the virus, that he was less than supportive of a full-blown shutdown.

“The evidence over the last six months shows that the costs of a really extreme shutdown are generally worse than the benefits and it is better to keep the economy running.”

According to Wikipedia, DeSombre co-founded Republicans Overseas for Americans abroad in 2013 in which the organisation focuses on tax reform. Upon his appointment as Ambassador, DeSombre stated that his office would primarily encourage the economic partnership between the two countries, with a focus on American investments and Thailand’s infrastructure projects and supply chains.

He has also said that US firms were interested in increasing investments in Thailand, including in areas under the 1966 Amity treaty. Thailand and the US established relations in 1818 and later formalised the ties in 1833.

PM Prayut Chan-o-cha will order legal action against anyone who “distorts information” about the government’s Covid-19 vaccination plan after the banned opposition politician Thanathorn Juangroongruangkit had raised the topic of “Royal Vaccine: Who Benefits and Who Doesn’t?” on his Facebook Live feed on Monday.

On the Facebook Live, Thanathorn criticised the government’s vaccine procurement and production, commenting that the government is too slow in securing sufficient inoculations.

“Thailand pinned its hopes only on AstraZeneca which allowed local pharmaceutical manufacturer, Siam Bioscience, to produce its vaccine. The government had not held talks with other countries until Jan 3 when it announced it will buy 2 million doses of vaccines from Sinovac which is a very small quantity… enough for only 1.5% of the population.”

Siam Bioscience is a royally-sponsored company that has partnered AstraZeneca to produce the vaccines for Thailand and other countries in the region.

According to Dr Nakorn Premsiri, director of the National Vaccine Institute, Siam Bioscience invited the British-Swedish pharmaceutical group AstraZeneca to visit its plant to see whether it met the criteria required to produce the vaccine at a minimum of 200 million doses per year. The government approved 600 million baht to improve the plant’s facilities to produce the Covid-19 vaccine according to the requirements of AstraZeneca.

Responding to Thanathorn’s comment, the PM says he will order prosecution for anything “that is distorted and not factual” that gets published, whether in media or on social media and that he has to protect the government’s credibility from those who are “irresponsible” with their remarks.