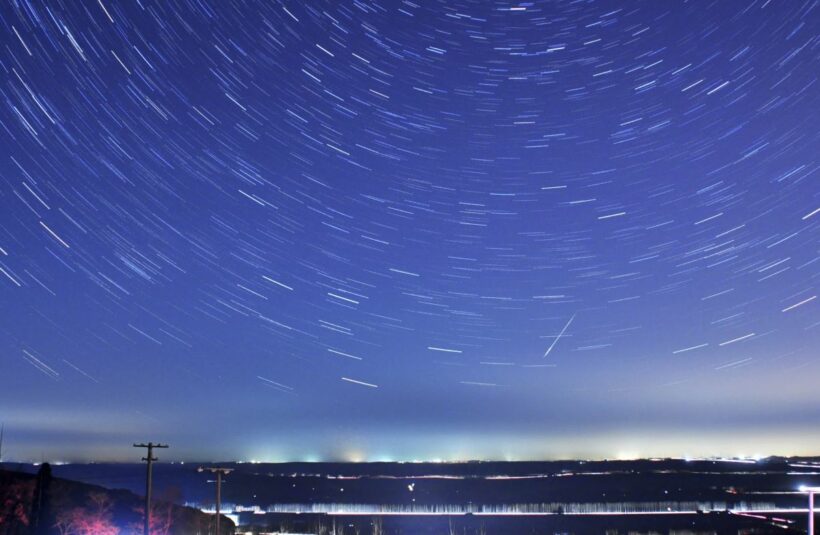 It’s an exciting few weeks for locals looking up to the skies. Last week we had a partial solar eclipse across Thailand (most prominent in the south), and tonight (early Saturday morning) we will have a meteor shower. But you’ll need to get up early to watch it.

Star gazers will be able to witness the new year’s first display of shooting stars (meteors), called the Quadrantid meteor shower. The display will be visible early Saturday morning, January 4, according to Suparoek Karuhanont of the Thai National Astronomical Research Institute.

The best time to see watch the meteor shower is from 2.30am until dawn on January 4, because there will be no disruption caused by moonlight. The shower could display as many as 120 shooting stars an hour.

The Quadrantid meteor shower is considered to be one of the best annual meteor showers around the world. Most showers have a two-day peak, which makes catching sight of them far easier. The Quadrantids peak, on the other hand, is for only a few hours.

Unlike many other meteor showers, the Quadrantids are famous for spitting out “fireball” meteors that blaze by in a dazzling array of unusual color and brightness.

First spotted and scientifically documented in the 1800s, astronomers aren’t even sure where the meteors hail from. While Earth experiences most showers of this sort when it hurtles through the debris of comets, our solar system’s dirty snowballs, the Quadrantids were first thought to have been birthed from a body based more in rock than ice: an object called 2003 EH1 – a “dead comet” – one that’s shed its volatile ices after circling around our sun too many times. Other astronomers believe that 2003 EH1 may share a history with the comet C/1490 Y1, described by Asian astronomers 500 years ago.

To give your eyes time to adjust, head outdoors about half an hour before you begin looking to the skies. Weather is predicted to be generally fine around Thailand this weekend so fingers crossed there isn’t too much cloud.