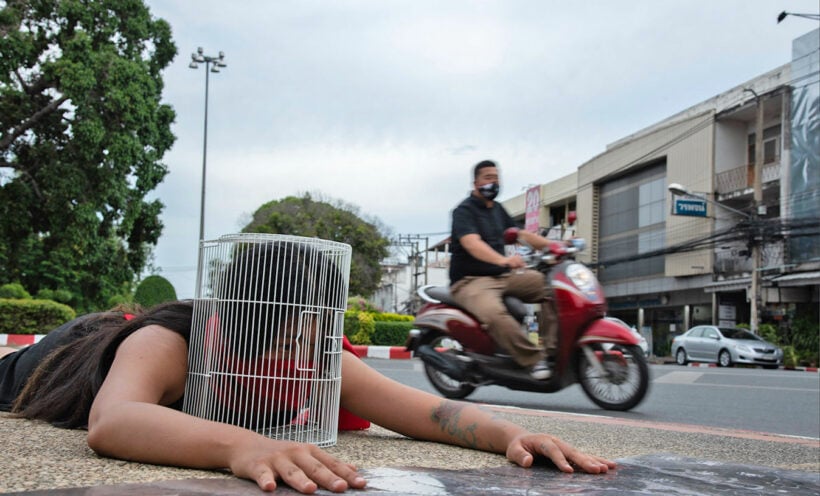 PHOTOS by Will Langston

With anti-government protests dotting the nation for over a week, performance artists in Chiang Mai took to the streets yesterday evening with a different type of demonstration – in favour of free speech. As the sun began setting, artists at each corner and junction of the old city’s moat could be found waiting to perform. At 5pm, each artist began performing their own unique protest. They used their bodies, costumes, props and words to express themselves as locals and foreigners alike looked on at their guerilla-style presentations.

Many of them were Chiang Mai University students or alumni who have organised a new local alliance, calling themselves The Chiang Mai Performance Art Group. CMPF members and members of the Lanyim Theatre showcased their unique views on the free speech theme: the name of the performance was  “Hope/Breathe/Die”. Each member expressed their interpretation of freedom of speech in the modern world. Photos of some of the performances can be found HERE.

The performances lasted for 2 hours and artists not affiliated with CMPF were also invited to participate. Acts ranged from situational skits to sewing words such as “democracy” into fabric and walking blindly while singing. According to one performer:

“We want freedom of expression and to not be afraid.”

Plans are reportedly already in the works for more public expressions on contemporary topics.