I am sitting at the edge of the gorgeous Kata Rocks infinity pool at sunset with the world’s only underwater portraitist, who as far as I can tell, is probably also a mermaid. Her name is Olga Belka and she is as gorgeous and exotic as you might expect of someone with such a gorgeous and exotic claim to fame!

The daughter of a Russian army officer who grew up in Moscow, Olga is one of those slim, blond, statuesque Russian beauties, who takes your breath away when you meet her. Something she has in common with the sunset at the Kata Rocks infinity pool, perched tantalisingly on its rocky promontory overlooking the sublime beauty of the Andaman Sea between Kata and Kata Noi Beaches, with magical Boo Island off to the north.

When I first met Olga at her recent exhibition in Aquaria Phuket which runs until the end of January 2022, I just knew that for an artistic mermaid of her sensibilities Kata Rocks at sunset would be the ultimate choice for a meal and a chat.

Kata Rocks is the ultimate ocean-side, super-luxe resort in the region, so it’s no surprise that it has won over fifty international property and hospitality awards including ‘Best Apartment in the World’ at the London awards and “Asia’s Leading Villa Resort” at the 2015 World Travel Awards.

The energy and aura of the ocean is everywhere around Kata Rocks and embraces the cavalcade of superb villas and apartments which cascade down the steep rocky headland toward the pulsating Andaman itself. The luxurious white structures of Kata Rock’s award-winning design even reminiscent of the proud superstructure of a Superyacht, while the charm and efficiency of the staff as they served us our sun-downers, felt like being pampered by the crew on board a billionaire’s ocean-going toy!

Lambent green illumination rose from the squid-boats on the horizon provoking Olga to say; “Have you ever seen the mating dance of the male Cuttlefish (Sepia apama) as he, or rather ‘they’, try to attract a solitary female’s attention and agreement to mate? It’s the most exotic and glorious dance in nature, as the male changes colour, shape and texture, all the while gyrating and dancing madly about trying to attract the female.” 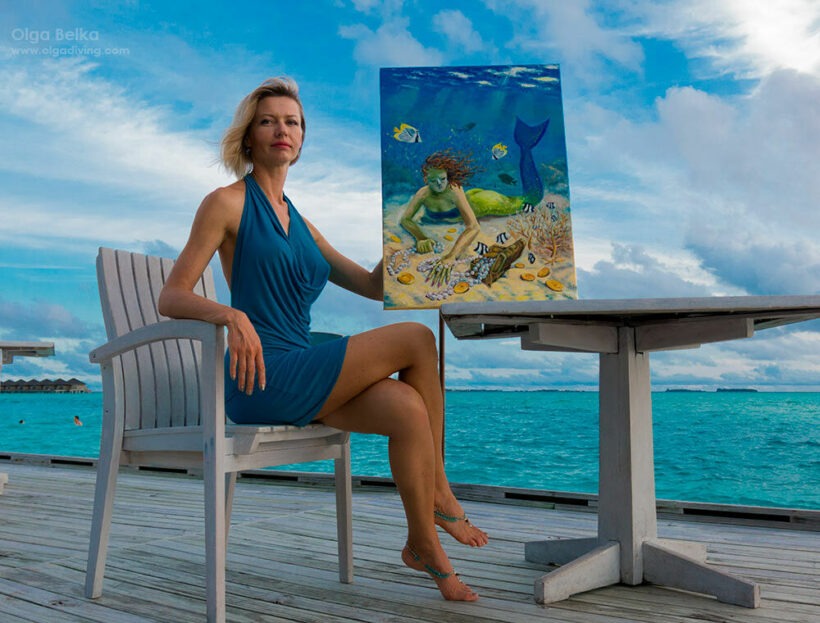 As a scuba-diving enthusiast, I’d in fact had the enormous privilege of witnessing this display while diving in the Similan Islands and I couldn’t help thinking that it was probably the sort of adoring male courtship display to which Olga was quite used to herself!” Olga had several forebears who were artists, yet her parents wanted her to pursue a career which was more predictable and lucrative.

So, she quietly sketched and painted in secret while growing up, then at age 17, announced that she was going to study art and design at university in Moscow. Daddy was not amused by this, but I got the strong impression that the formidable creative force that is Olga Belka, is not to be trifled with in such matters!

As if reading my mind, Olga said… “After completing a six-year degree course and working illustrating childrens’ books in Moscow for a while, I woke one frozen morning and decided that I could no longer live in the cold. I went to a travel agent and asked for a ticket to a warm, tropical location, which I could enter with a Russian passport.

The agent said Thailand was the best option and so after telling my shocked family, I flew into Bangkok nine years ago. I didn’t know anybody there, but I managed to find work as an illustrator and began to settle in. Then one day I discovered that direct flights from Thailand to Sri Lanka had started, so I immediately bought a one-way ticket to Colombo to go diving, again without knowing a soul, or anything about the island.”

Sri Lanka was of course originally known by the Arab name of ‘Serendip’ which gives us the adjective ‘serendipitous’ meaning ‘occurring by happy chance’, which is an apt description of the romantic adventures of our eccentric Mermaid Olga, who went on to qualify as a scuba instructor, returned to Phuket to work in diving around the Andaman, then travelled to Egypt and the Maldives on further diving escapades.

“I was always fascinated by the intensity of colours and forms underwater and loved the peace and tranquillity of being isolated from I-phones, on-line media and even conversation. There’s something so soothing and complete about the sub-aquatic world, that one day I had the idea; ‘why not apply my love of art to depicting this other-world? Why not just start painting underwater?’”

By now a sensational maritime-themed supper had arrived including the freshest Andaman ceviche and steamed Thai snapper for me and a tangy tuna tartare for Olga, served in a surreal Salvador Dali-styled wooden hand! This was highly appropriate, as Olga had just told me that Salvador Dali was her greatest artistic influence and because the whole interview was, for me at least, becoming completely surreal!

I asked Olga about the inherent challenges of her wave-breaking innovation of taking her painting underwater. “I set out to capture not only the beauty of the underwater world, but also its energy and the emotions and feeling that it stimulates in me. I usually paint in sittings of up to three hours, wearing full scuba gear, as does my subject if I am doing a portrait. Each painting takes me up to six such dives and I use specially-made waterproof paints, which can be applied underwater, while being totally harmless to the aquatic environment.”

I put it to Olga that she was in fact a performance artist in which she herself was an integral part of the art, creating an alchemy combining diving and the underwater world with painting, colour and expression. And in the middle of it all is the beautiful, enigmatic mermaid named Olga.

She seemed to like this summation and said; “In European folklore, which greatly influences me, mermaids are renowned as beautiful and dangerous creatures and I wanted to convey the riddle of their being in my paintings.”

You can meet the riddle that is Olga Belka and view her fascinating underwater art at the upcoming Kata Rocks Superyacht Rendezvous from December 10 – 12 or at the Aquaria in Phuket until the end of January 2022.

Jason
Why do I get the feeling this isn't the usual content.....the paintings are amateurish and the content of the story is fanciful....

ThaiEyes
3 minutes ago, Jason said: Why do I get the feeling this isn't the usual content.....the paintings are amateurish and the content of the story is fanciful.... Every painter starts out as an amateur, especially when painting under water! 😉

Rain
2 hours ago, Jason said: Why do I get the feeling this isn't the usual content.....the paintings are amateurish and the content of the story is fanciful.... And promotionally, very Farang-centric for a supposedly Thai-themed venue..🤨 Almost expected.