The exhibition attempts to portray the horrors of the massacre and the events that led up to it. The displays include photos, interactive displays, with volunteers to provide explanations. There are many vivid images and sounds of the day’s fateful events, 44 years ago, today. 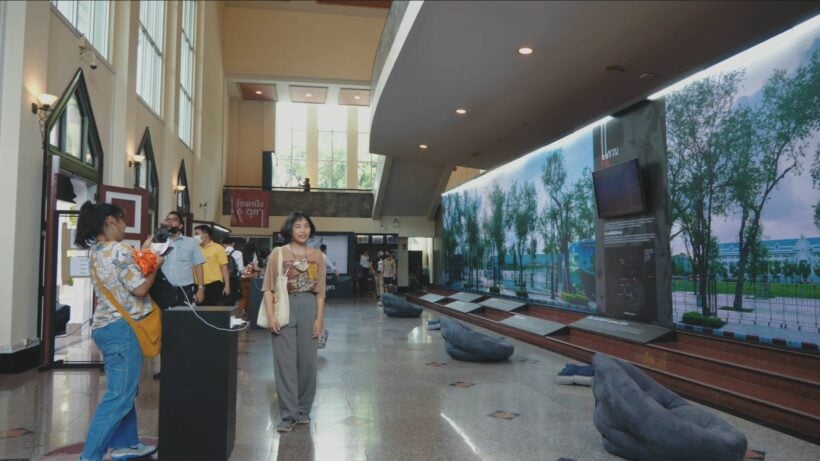 Political, economic and ideological factors at the time caused Thai society to polarise into socialist-minded left, and conservative and royalist right camps.

The unfolding of the massacre in 1976, 44 years ago, started a few weeks before October 6, when the tortured corpses of 2 electricity officials, sympathetic to the left, were found hanging on September 24, in Nakhon Pathom, north of Bangkok. The discovery of these bodies sparked a series of protests, culminating in the bloody crackdown by police and army at the Thammasat University campus 2 weeks later.

In the mid 1970s, communist forces had taken control across the South East Asian region. In 1975, Thailand’s neighbour Laos had fallen to communist troops who deposed their monarchy, while North Vietnam had defeated the Americans and South Vietnam in the drawn out Vietnam war. In Cambodia a horrific genocide was underway led by the ruthless Khmer Rouge whose intent was to take ‘Kampuchea’ back to ‘Year Zero’ in a textbook communist dystopia.

Thailand was struggling with its own communist insurgency, along with political instability and a faltering economy. After their success of ousting the ‘dictator’ Field Marshal Thanom Kittikachorn just 3 years before, Thais protested to demand greater freedoms and a more just society.

The protests gathered pace when word spread that two widely vilified Thai leaders, exiled after the “people’s uprising” of 1973, were heading back to Thailand.

On August 16, 1976, it was reported that Field Marshal Prapas Charusathien had returned. 3 days later, about 10,000 protesters marched from Sanam Luang to Thammasat University’s football field and camped there overnight. More university students joined the protest, prompting Prapas to flee Thailand again on August 22.

The other exiled leader to attempt a return was Field Marshal Thanom Kittikachorn. He been sent into exile just 3 years earlier by the people’s uprising. Thais were appalled when Thanom, widely dubbed a “tyrant” and “dictator”, and whose government was notoriously corrupt. The government of the time, led by MR Seni Pramoj, at first declined Field Marshal Thanom’s plea to be allowed to return from exile to attend to the health of his elderly father.

On September 19, the government relented and Thanom returned to Thailand, donned the saffron robes of a monk and was instantly ordained at Wat Bowonniwet Vihara. He was also visited by the Thai King and the Queen.

The government’s about-face would prove to be a crucial error.

His presence further polarised the fragile Thai political divides. The country’s right wing used the anti-communist rhetoric of the day to accuse the protesters, and their attempts to kick out the recently returned Thanom, as a left-wing rump who supported the communists.

Timeline of a Massacre

On September 23, a heated parliamentary debate prompted Thai PM Seni to resign after the left and right wings of his party failed to find a compromise to deal with Thanom. HM King Bhumibol would order the prime minister’s re-instatement just 2 days later.

On September 24, the bodies of the 2 electrical officials, who had been part of protests to oust Thanom, were found hanged at the Red Gate in the main city district of Nakhon Pathom. Student leaders were able to find direct photographic evidence of the crime and its political nature.

On September 25, student leaders issued two demands – for Thanom to be exiled and for the murderers of Wichai and Chumporn to be brought to justice.

On September 29, more than 20,000 students gathered at Sanam Luang field near Thammasat to voice the demands. Other protests sprang up in other parts of the country. Many of the protesters were attacked by right-wing thugs describing themselves as patriots.

On October 4, Seni revealed that a group of policemen were behind the killings of Wichai and Chumporn. Dozens of right-wing thugs descended on Sanam Luang to intimidate the protesters. In response, the students took refuge in the campus.

On October 5, the Bangkok Post inflamed the situation when it published a report and photo of a student play about the lynching and hanging of the 2 men. A right-leaning newspaper called Dao Siam published the same photo, claiming one of the students shown hanging bore a resemblance to the Crown Prince, now Thailand’s King. In a story headlined “Stomping on the Hearts of Thais across the Country”, it claimed the play was a deliberate insult to the Prince.

The play’s performers immediately tried to clear up the confusion, but by then several right-wing radio stations and other media had started describing the protesting students as “insurgents”.

Tensions finally boiled over on the morning of October 6, when security forces surrounded the Thammasat University Tha Prachan campus and opened fire on the defenceless protesting students. Ultra-right-wing militias joined the attack and stormed the gates of the university. Students were beaten and killed on the spot or dragged out and lynched on neighbouring Sanam Luang in front of baying mobs. The official death toll was 45. Of the dead many were state officials, with 145 people injured. Unofficial accounts claim that more than 100 were killed.

Some corpses were hanged on trees, just over the road from the university, and beaten in front of the assembled crowd. One image, taken by AP photographer Neal Ulevich, captured the senseless brutality and madness of the morning on film; the most famous is the photo of a mutilated corpse dangling from a tree as a man gleefully smashes the lifeless body with a plastic chair. The crowd looks on, some even laughing. That photo would go on to haunt Thai politics for decades following. 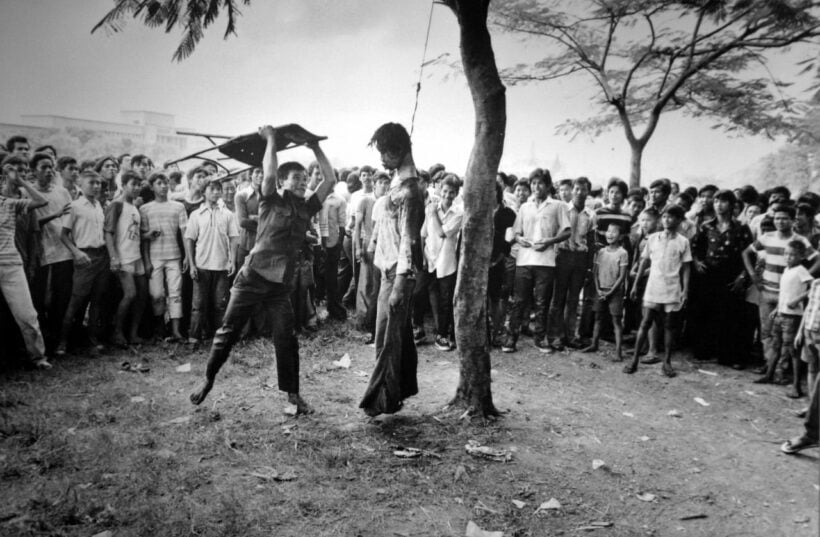 Priyakorn Pusawiro is a “creative technologist” at Thonburi’s King Mongkut’s University of Technology and worked as a key contributor to the exhibition.

“We present the facts here for experience-based learning, but we hope young visitors will seek more knowledge of October 6’s events after they leave the exhibition.”

Other key contributors are Thanapol Eawsakul of Fah Diew Kan (Same Sky) magazine, Pataraporn Puthong who has produced documentaries and an archive of the events of October 6 at (doct6.com), and architect Benjamas Winitchakul.

Assistant Professor Prajak Kongkirati, a lecturer at Tammasat’s Political Science Faculty, says the commemoration should serve as a warning to ensure it doesn’t happen again.

“While revisiting the past at this museum, we should think about how to prevent such things from recurring … what precautions we can take.”

The displays also put the incident into context with geopolitical turmoil in the region at the time.

Professor Thongchai Winichakul remembers being the last person to speak on stage at that protest. Addressing the media to commemorate the incident, he recalled saying, “Please stop firing. We are unarmed. Our protest is peaceful.”

He recalled that he had been speaking for more than an hour in the hope of protecting thousands of people in the campus from the armed attack. He said he was enraged, scared, hopeless, sad, ashamed and crying as protesters ran for their lives in the chaos.

Thongchai ended up arrested and detained, alongside many of his friends, as the coup unfurled in Bangkok. 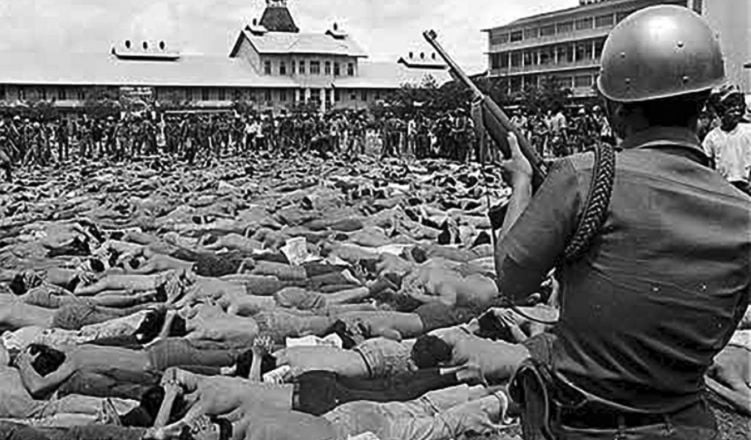 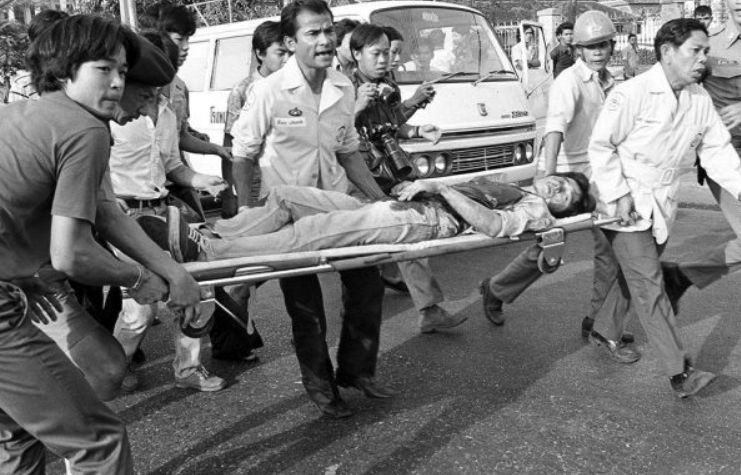 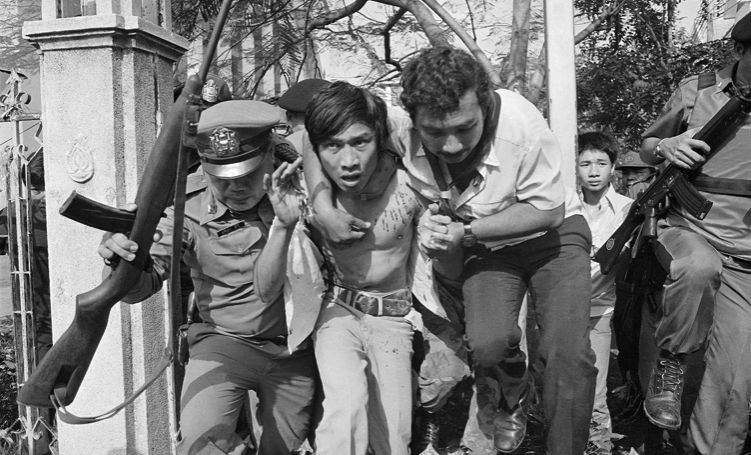 In the aftermath of the bloody incident, the military dictatorship, which had ruled Thailand for more than a decade, was overthrown. The unstable political climate which, made worse by the existence of fragile coalition governments, frequent strikes and protests, and the rise of communist governments in neighbouring countries, forced the hand of two separate factions of the Thai army to launch another coup in order to restore order.

No one ever faced justice for the bloody massacre or for the hanging of the two men on September 24, 1976.

A newly elected government, in the wake of the incident and a subsequent coup, had an official stance of “forgive and forget”. The Thai public remained largely silent and public discussion of the events of October 1976, to this day, spark a raw nerve in political circles, and open discussion about the Thammasat University Massacre is not supported by the current government of PM Prayut Chan-o-cha.

The exhibition runs this week until Sunday, October 11. Enter the main gate and it’s in the large building to your left. Entry is free.

On October 14, student protesters will hold another rally at the Democracy Monument as the demonstrations turn their attention to the Thai military’s involvement in politics.