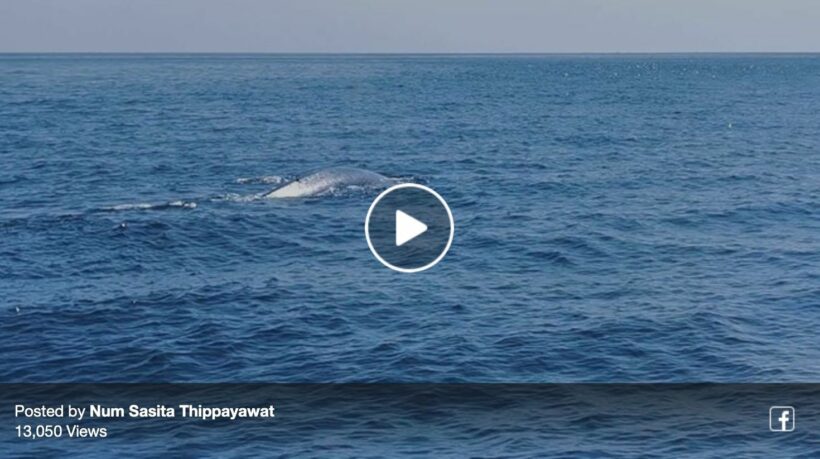 A scuba diving instructor has posted a video of a whale spotted near the Similan islands off the coast of Phang Nga. The whale is thought to be a blue whale species. The post was on his Facebook page called ‘Num Sasita Thippayawat’.

In the post there is also a video of a pod of dolphins swimming alongside the boat he was travelling on. Following the post, Dr. Thon Thamrongnawasawat, noted marine specialist and advisor to the government, commented that he thinks the whale was a blue whale, which is the largest animal species on earth.

Dr. Thon mentioned that blue whales can be as long as 30 metres and can weigh more than 170 tonnes. He said that the blue whales that are typically found in the Indian Ocean are usually smaller than the blue whales in other areas, which are the breeds that grow up in colder waters.

Blue whales usually eat krill that live 100 metre below the sea surface. A blue whale can dive for 10 minutes and whilst under the water they would reduce their heart rate to only 2 beats per minute. They are usually spotted with few other whales but they don’t tend to stay in a group.

Dr. Thon noted that the population of blue whales was in the hundreds of thousand, but they were still being hunted a lot as well. Lately, people around the world are trying to stop the annual hunt so the current population has increased but the exact number still cannot be estimated.