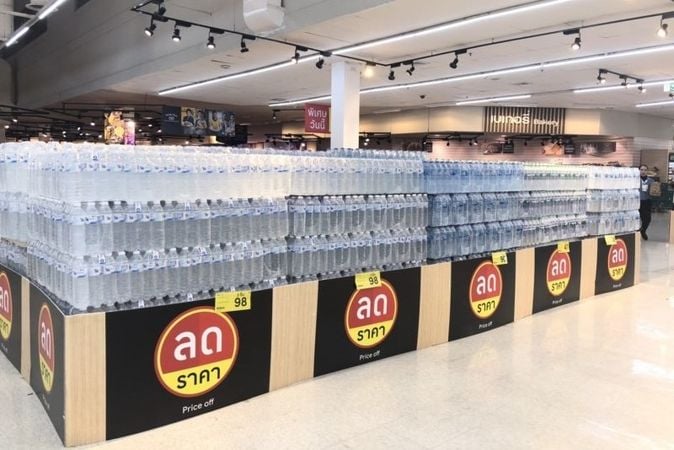 PHOTO: Tesco are ramping up their production of bottles water in Thailand - The Nation

Tesco Lotus, the Thai division of Britain’s biggest retailer, is boosting bottled water production to help customers cope with drought. The chain says it will increase production of its own branded bottled water and also increase orders of other brands to sell at its branches nationwide, in response to this year’s drought and water shortages, which is predicted to be the worst in decades

A spokeswoman says that stocks of bottled water will be increased 50% compared to normal supplies.

Tesco says the move is intended “to ensure there will be enough water to serve the demands of its customers around Thailand during the drought season.” Tesco Lotus is offering a discount on bottled water up to March 4 at all of its branches, including its Tesco Lotus Express stores, and is working with partners to reduce transport time by getting the water delivered directly from the factories to its stores, instead of via its warehouse facilities.

It has not been disclosed where Tesco is sourcing the water but, presumably, it is being sourced from current available water supplies.

Due to the hazardous pollution levels in Bangkok and the surrounding area, Tesco Lotus is also stocking proper N95 face-masks for people to protect against PM2.5 dust particles in the air. The masks are available at all branches. including Tesco Lotus Express. N95 classification masks will help reduce inhalation of the harmful 2.5 micron air pollution particles, as distinct with the flimsy, cheap paper masks distributed by government authorities and schools.