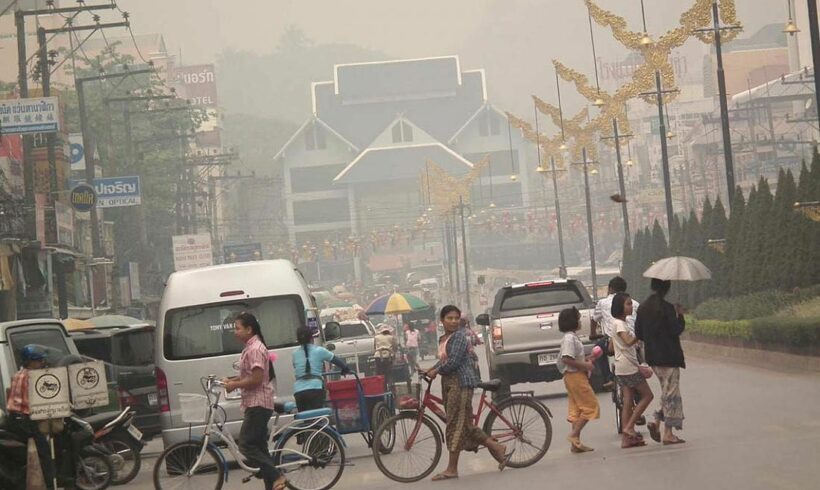 Chiang Mai is suffering yet another day of poor air quality index, according to aqicn.org. And whilst the air quality is bad, it’s still a lot better than it was a month or so ago when the readings zoomed up to 300-400, and somedays, even higher.

aqicn.org data reports that Chiang Mai’s air quality index had a PM2.5 level of 168 micrograms per cubic metre on average, 50 AQI being Thailand’s upper safety limit. This represents the 86th consecutive day with air quality index above 100 in Chiang Mai. The AQI is a standard that indicates the level of air pollution – particulate of 2.5 micron particles per cubic metre of air.

Chiang Mai’s air pollution has been a consistent issue, since the northern Thai city was declared ‘most polluted city in the world’ on March 10, according AirVisual.com. The city has ‘won’ the accolade on more than 10 days this year. Adding to the problem, in recent months, has been the forest fires challenging local authorities in the mountains around the city.

A news report from Channel News Asia (below) onApril 6 gives an insight into the long days and life of a firefighter in the region. Chiang Mai firefighter Amphon Kanchan said that the situation this year is more severe than before. He also describes the tough conditions as steep terrain makes certain parts of the forest difficult to reach.

“This year is dry. There has been no rain. I’ve been working nonstop for almost 2 months and haven’t gone home yet”

Haze has been a common phenomenon in North Thailand and particularly Chiang Mai for more than a decade. It usually occurs from January to April, but peaks in March as extremely dry conditions increase the severity of forest fires, mostly deliberately lit. The situation is intensified by farmers who burn waste to clear land for the next harvest season.