As leaders from around the world gather in Bangkok for the inaugural “SEA of Solutions: Partnership Week for Marine Plastic Pollution Prevention”, GA Circular has launched a new report ​“Full Circle: Accelerating the circular economy for post-consumer PET bottles in Southeast Asia”.

The report provides for the first time, systematic and comparable baseline collection rates for PET bottles (one of the most recyclable forms of plastic packaging) in Southeast Asia and highlights the need for a fundamental shift in the approach to driving circularity of PET bottles.

On a mission to create a world without waste by driving the transition towards a circular economy in Asia, GA Circular says that it is vital to move beyond singular efforts and work collectively on efforts to pull packaging material through the value chain by driving material value. 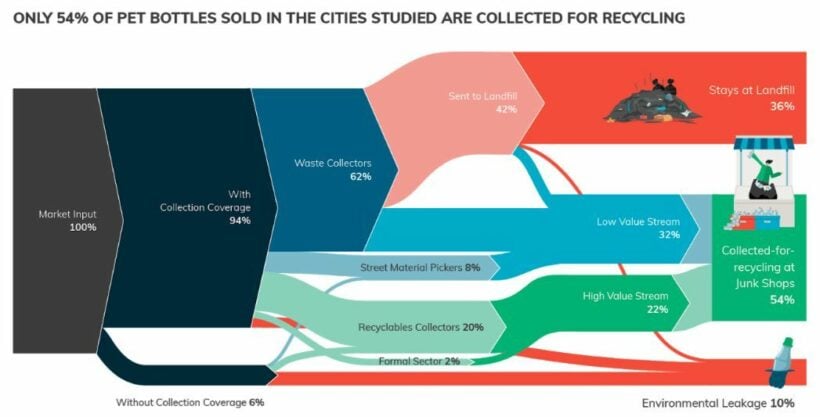 Meanwhile, PET bottles are 100% recyclable and have one of the highest intrinsic post-consumer material values amongst the materials commonly used for consumer-goods packaging in Southeast Asia. It is for this reason that PET bottles are one of the most commonly collected items by the informal sector.

Multiple efforts have been initiated by the industry and government over the past decade to increase collection and recycling, however most of these efforts have ceased within one to three years or have not ‘moved the needle’ in terms of increasing collected-for-recycling rates. The past initiatives have been quantified and are a ‘drop in the ocean’ relative to the amount of PET bottles consumed.

Against this backdrop and the projected growth in PET bottle consumption of 886,000 tonnes in 2018 to 1.52 million tonnes in 2030, it is critical to focus on systemic solutions. The most effective response to the challenges currently facing the post-consumer PET landscape in Southeast Asia is one that effectively and continually boosts the collection and recycling operations currently in place.

The report highlights key systemic solutions to drive circularity: an industry-led Packaging Recycling Organisation (PRO) focused on boosting the value chain (including benefitting the informal sector) coupled with supporting policies, the use of recycled content, and investments into increasing domestic recycling capacity. Similar models have seen success in comparable developing countries such as South Africa and Mexico. PET bottle collection and recycling rates have increased to over 55% in both countries. As of 2018, South Africa has a 66% recycling rate for PET bottle, with 100% of the material recycled locally.

Two other factors that play an important role are improved packaging design to improve the economics of recyclability, and national government and municipal efforts to impact source separation and separate collection. 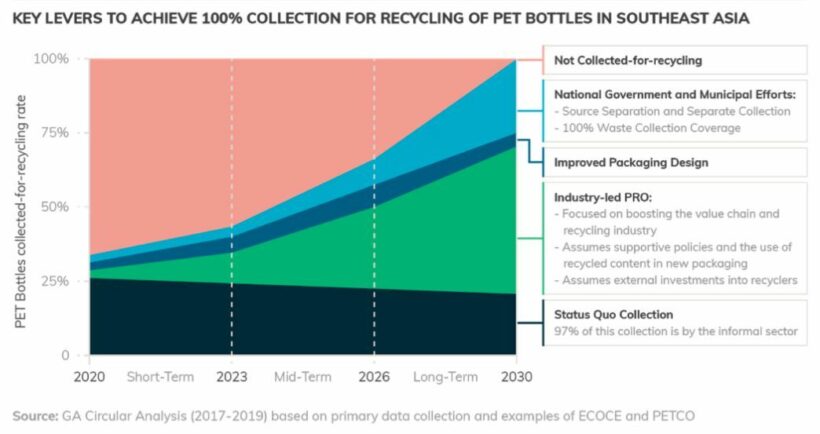 Ashwin Subramaniam, Founder and CEO of GA Circular said “The report aims to shed light on the current realities for post-consumer packaging in Southeast Asia. A realistic baseline is critical in informing the direction and nature of solutions to be implemented and this is what this report provides. AcirculareconomyforPETpackagingis100%possibleintheregionanditisoursincere hope that the recommendations outlined in this report are fully considered by industry, policymakers and investors”.

By publishing the report, GA Circular said it sought to bring an important missing piece to packaging circularity solutions in Southeast Asia, demonstrating the key levers for industry, investors and policymakers to build a thriving and robust recycling industry.

“The report delivers a first-of-its-kind analysis of collection-for-recycling rates for PET plastic in key ASEAN cities and frames up a circular economy roadmap specifically tailored for the region, with a concrete set of recommendations geared towards interventions with the highest impact. At Coca-Cola, we are committed to executing these recommendations with our partners, and we have already begun to move in earnest. It is our hope that this report also helps to drive broader understanding, coordination and momentum in our shared efforts to tackle marine plastic pollution in Southeast Asia and globally” said ​Michael Goltzman, Vice President of Global Policy and Sustainability at The Coca-Cola Company.

GA Circular calls on companies and industry in Southeast Asia to adopt voluntary PROs focused on value creation mechanisms and material end markets; and for governments to support with enabling policies and standards for the circular economy, such as food grade recycled content standards, recycled content targets, and source separation and separate collection. 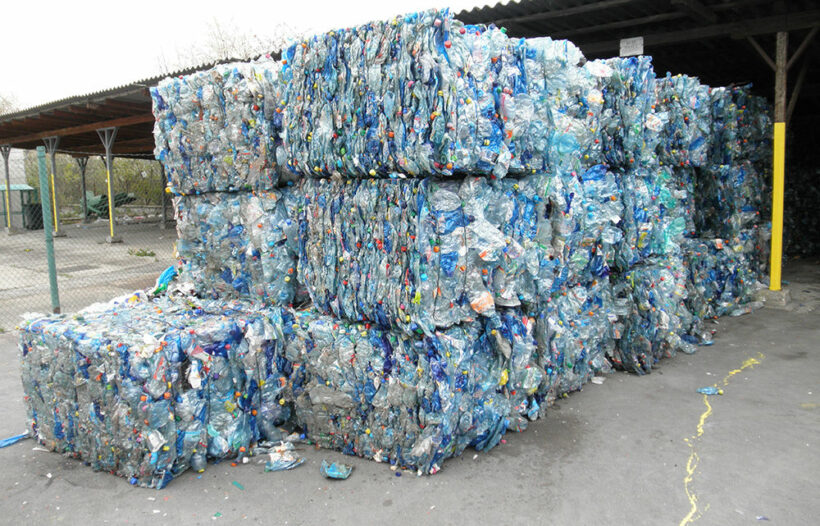 GA Circular is a research and strategy firm specialising in circular economy, recycling and waste management. GA Circular’s mission is to create a world without waste by driving the transition to a circular economy in Asia. GA Circular collaborates with companies, government, international foundations, investors and multilateral agencies to unlock business opportunities from fast-growing streams of food and packaging waste across Asia.

Established in 2011, GA Circular is a B Corporation certified social business. GA Circular is headquartered in Singapore and operates throughout Southeast Asia and Southwest Asia.

Increase in use of biodegradable krathongs pleases Bangkok governor