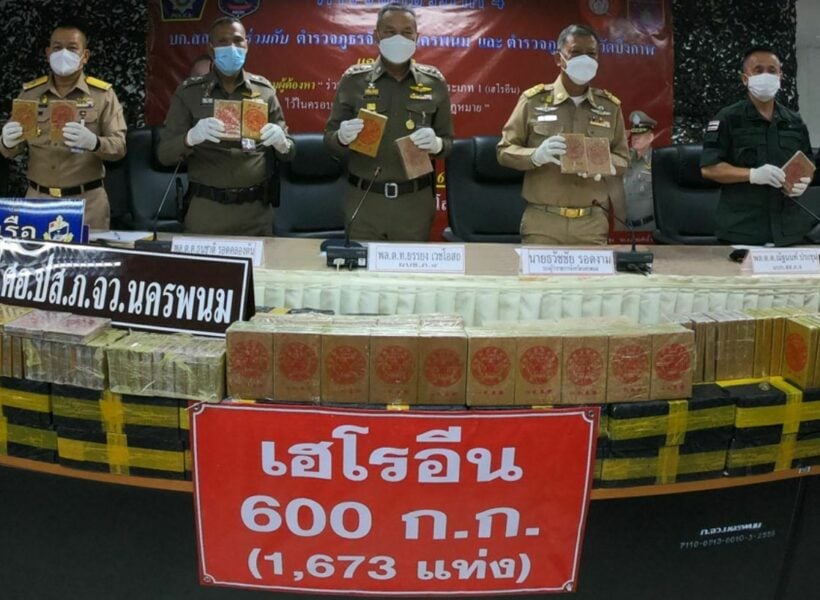 PHOTO:Police pose with a 600kg heroin drug bust, the largest in the Northeast this year. (via Pattanapong Sripiachai)

The largest haul of heroin in Thailand’s Northeast region this year was intercepted today when authorities impounded 600 kilogrammes of compressed heroin in Nakhon Phanom. The chief of Provincial Police Region 4 confirmed that the stash with a street value of at least 2 billion baht was seized late last night by local police in possession of a suspected drug runner.

The 46 year old suspected drug transporter was followed by local police and taken into custody at a resort in Ban Phaeng district. They searched his car and discovered the 600 kilogrammes of heroin divided into 1,673 bars of the drug in a compressed form. The man claims he is merely a paid drug courier and someone paid him only 5,000 baht to move the 2 million baht of heroin from there to the south of Thailand. It seems that police were able to capture him before his journey even began.

He told police the unnamed people who hired him were members of an international drug cartel. The drugs are suspected to have come into Thailand via a northern border, either Myanmar or likely Laos. They would be moved across the country to the southern region where the heroin would be sent across borders and sold abroad.

Drugs flowing across the Myanmar border have become more difficult with the Burmese civil unrest since the February 1 coup compounded by the Covid-19 pandemic swarming the region. Security along the porous border has been strengthened to prevent migrants and refugees from bringing Covid-19 into Thailand. Drug traffickers have been shifting their supply routes to cross into Thailand over the Laos border instead.

The whole region at the intersection of Thailand, Myanmar, and Laos, called the Golden Triangle, has long been a hotbed for illicit and illegal activity including rampant drug trafficking as well as human and animal trafficking, gambling, and more. Police have been working hard to reduce the influx of drug trafficking from the region into Thailand and this is the latest (and one of the largest) in a near-constant string of large drug busts.

A number of police agencies collaborated in identifying, tracking, and apprehending this drug runner, and authorities pledged to continue the investigation in hopes of capturing more members of the drug cartel higher up in the network and perhaps even uncover the kingpins of the operation.

D2B2
That trafficker has a future. He could be a member of parliament
Stardust
Thats what will be left in Thailand like it is when a country will destdoyed abd transformed in a poor 4th world dictatorship country. The new economy that will destroy the country further and put it in the lowest level.…