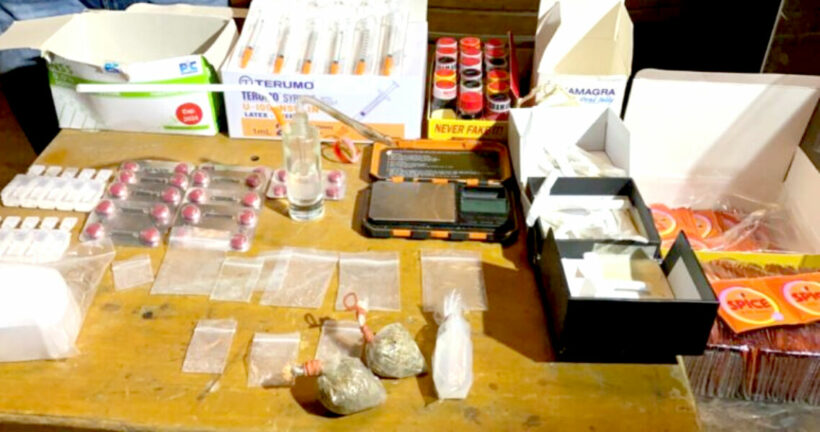 PHOTO: Police busted a drug party at a Bangkok gay club for a second time. (via Daily News)

A gay club in Bangkok that had previously been busted for operating illegally in May has been busted again as police raided a drug party there last night. The large venue on Ramkhamhaeng Soi 21 had generated complaints to the police that people were drinking and doing drugs inside.

Officers from the Children and Women’s Welfare Supervision Division as well as the local Wang Thong Lang officers were involved in the raid where 10 men were arrested and taken into custody.

The large venue is spread across 2 separate buildings, one 3 stories and the other 5 stories high, with 50 separate rooms including karaoke, a sauna, and even a swimming pool.

After police received the complaints of drugs and drinking in violation of Covid-19 regulations as well as Thai anti drug laws, they searched the premises and uncovered several controlled and illegal substances.

Police took into evidence crystal methamphetamine, commonly known as ice, as well as Viagra and other aphrodisiacs ingested nasally. Other drug paraphernalia and drug-taking equipment such as syringes were also confiscated.

A deputy officer from the CWWSD confirmed that the same venue was raided in May resulting in 57 people being arrested. The venue apparently decided to reopen and continue operations secretly assuming that the police would not discover them or bust them a second time.

Even after previously being busted by the police and facing criminal charges, the 63 year old owner still admitted that he had no license to operate such an establishment.

Police across Thailand have been cracking down on bars, clubs, and entertainment venues being opened illegally, and punishing owners, staff, and patrons.

TheDirtyDurian
JamesR
It would be funny if they raided girly bars in Pattaya, they would end up arresting hundreds of old farangs also caught with Viagra as in the article above.
Lawyers_Guns_and_Money
9 hours ago, Shade_Wilder said: Why officers from the Children and Women's Welfare Supervision Division? Did the 'Boys in Brown' (BIB) figure that they looked waaaaay too sexy in their tight uniforms and that the gays wouldn't be able to…
DiJoDavO
"The large venue is spread across 2 separate buildings, one 3 stories and the other 5 stories high, with 50 separate rooms including karaoke, a sauna, and even a swimming pool."   Even a swimming pool😱😱😱 Just like that time…

Bangkok to see short and long-term improvements for canals