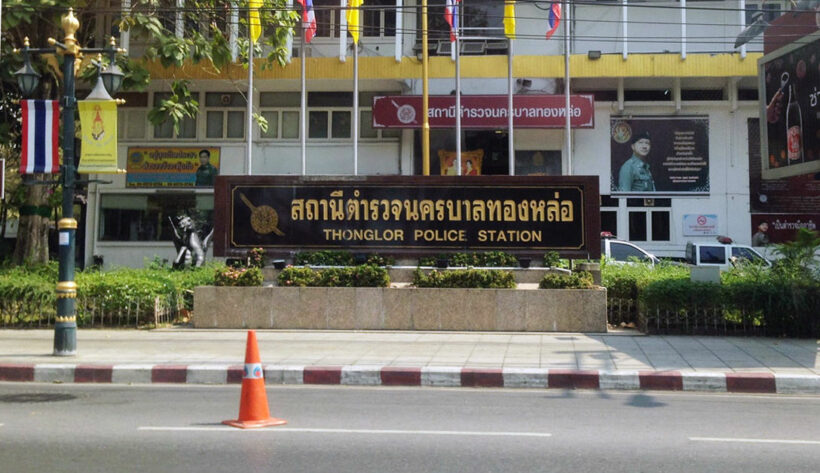 Three policemen who worked out of the Thonglor Police Station, on the eastern edge of Bangkok city, have been suspended from their duties las Friday, pending a full enquiry. Thai Rath reported that the three had been relieved of their duties after allegedly receiving a bribe from a French businessman.

The probe put the local Police Station’s “drug test” policy back in the spotlight, after a French businessman, reported as Jean Sebastien, posted that the three police reportedly extorted him 8,000 US$ (about 245,000 baht) in exchange for dropping drug charges against him.

He had earlier been accused of testing positive for marijuana. He said was told to pay a sum of money to the three policemen who said they could “fix the problem” for him.

The head of the Division 5 police Samart Srisiriwibulchai said the French man told investigators that he had been stopped for a drug search in Soi Sukhumvit 43 on October 28 this year.

He claimed that police conducted a strip search on the man. Despite finding any incriminating evidence he was still taken to a hospital for a urine sample and testing.

Once the test results found him positive for marijuana use, police report that Sebastien was allowed to contact a friend, who gave him the advice to transfer US$8,000 to his girlfriend’s account in exchange for negotiations with Thonglor police “make the problem go away”.

Sebastien allegedly agreed with the deal and was released from police custody. Since then he was unable to contact his friend.

Sebastien contacted the French Embassy in Bangkok and filed a complaint with the national anti-graft commission, claiming that he suspected his friend colluded with the police in the matter.

A police spokesman Krissana Pattanacharoen says that disciplinary action will be taken against the officers if found guilty. He added that Sebastien was eventually released without charges being laid because police found a doctor’s prescription for marijuana. (Medical marijuana and cannabis products are being prescribed by authorised doctors in some cases since an update to Thailand’s drug laws this year).

Songkhla jail escapee recaptured after a day on the loose