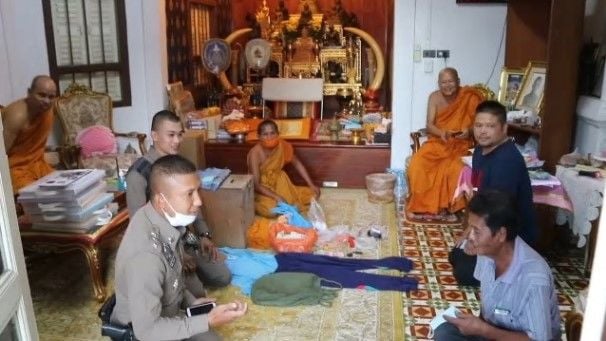 A man allegedly posing as a monk to solicit donations and 3 others allegedly involved in the scam were arrested by Phuket police. Some complaints regarding the fake monk had reached the governor. Police say they found a man dressed in the orange robe and 3 others sitting in the back of a pickup truck with a bag full of money.

The man dressed as a monk, police identified by the name Boonlong, claimed to be a monk for 8 years. He showed a certificate confirming he was registered, but when police called the temple named on the document, they said Boonlong is not a monk at the temple.

Boonlong was also questioned by the head monk in Phuket’s Mueang district Phra Khru Mettaphiron. He asked Boonlong to pray, but he didn’t even know how to begin a standard prayer.

After the questioning, Boonlong said the certificate was fake and he wanted to make money by asking for donations, according to police. All four of the people involved face charges for deceiving the public.