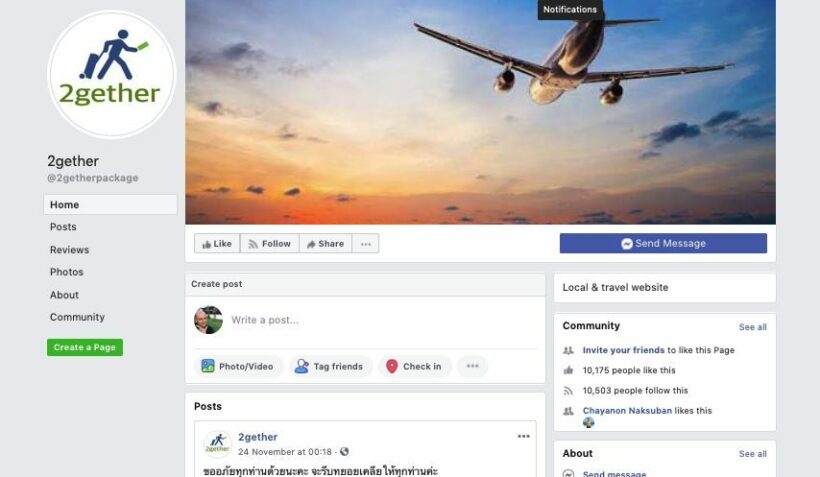 …who scammed victims out of 31 million baht.

A fake package tour agency who used social media to scam customers out of a total of 31 million baht now has 514 complaints lodged against it, with 100 complaints lodged with the Vice Minister of Justice yesterday. The complaints were lodged at the ministry’s offices in Chaeng Watthana, Bangkok.

The Nation reports that complainants accuse both the Facebook page “2gether” and Instagram account “twogether1” of selling non-existent discounted airline tickets and tour packages, with one plaintiff, named only as Juthapha, claiming she paid over 400,000 baht for five tour packages to six countries.

Juthapha says she made the booking through the “2gether” Facebook page, but the owner of the page then claimed to have been cheated by a tour agency and was unable to provide the trips in question or issue a refund.

Juthapha is now calling for a full investigation to identify and prosecute the culprit.

“We would like the Department of Special Investigation to take these cases and charge the culprit with public cheating and fraud. I dug deeper and found that the page owner booked the tours and hotels in the names of family members instead of the company’s name, so I suspected this was a case of fraud.”

“Other victims who came here today were in a similar situation; some even went on the trip to Japan and got stranded there, as the company didn’t provide return tickets or any accommodation.”

Samart Jenchajitwanit, Vice Minister of Justice, says he accepts all the complaints and will consider involving the DSI, acknowledging that the criteria for doing so has been met.

“It is eligible for investigation as a public cheating and fraud case for which the law dictates that plaintiffs must number more than 300 persons and this case has more than 500.”

Thailand to export additional 1 million tonnes of rice to China