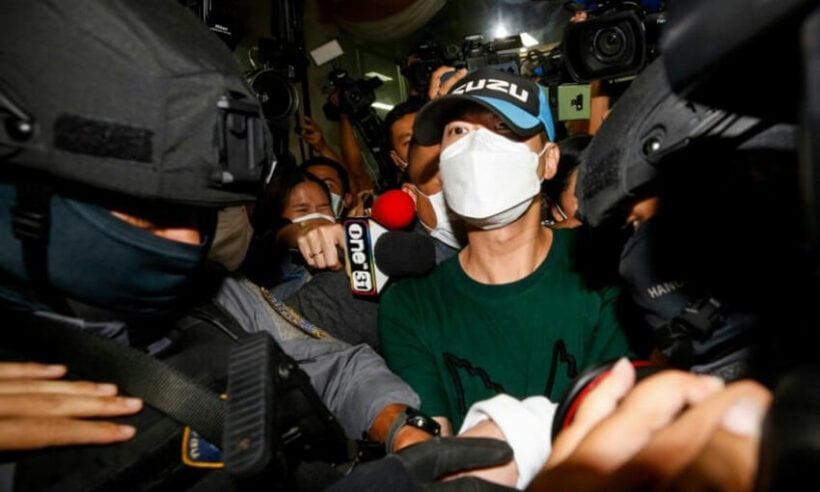 Former police chief Thitisan Utthanaphon is calling for human rights observers to be blocked from attending his trial for torture and murder. Thitisan, who has been nicknamed “Joe Ferrari” because of the lavish lifestyle he lived and the luxury cars he accumulated while on a policeman’s salary, has asked the Criminal Court to stop the rights observers from attending his trial.

Thitisan and several other officers are on trial accused of killing a drugs suspect during questioning by suffocating him with plastic bags. The incident took place in the northern province of Nakhon Sawan last April and came to light when CCTV footage was leaked, causing a storm of protest among the general public.

The Bangkok Post reports that Thitisan made his first appearance at the weekend, with hearings expected to continue at the Central Criminal Court for Corruption and Misconduct Cases this Saturday and Sunday. Thitisan and his lawyer have demanded to know why human rights observers, which they call “unrelated individuals” should be admitted by the court.

The lawyer for the former chief of Nakhon Sawan police has also attempted to tone down the seriousness of the accusations faced by his client, describing the alleged death-by-torture of Jeerapong Thanapat as “general” physical assault. According to the director of the Cross Cultural Foundation, Pornpen Khongkachonkiet, the lawyer has also suggested that the case could tarnish the reputation of the Royal Thai Police.

The Bangkok Post reports that Pornpen says the foundation has made 4 requests to observe the hearings and each one has been declined. She says the foundation submitted another written request on Saturday. The Cross Cultural Foundation was founded in 2002 and works to protect, promote, and monitor human rights in Thailand.

DoUKnowWhoIAm
55 minutes ago, Thaiger said: tarnish the reputation of the Royal Thai Police. Like it could get much worse. Tarnish something that's already completely tarnished.
Fanta
It’s not like Isuzu Joe to be shy. He should welcome human rights observers to be at his trial to ensure he gets a fair trial. The sooner this trial is concluded successfully for the prosecution the better for the…
PATRIQUE
If you know the scenery the guy worked in and you know Thailand - ec Bangkok , than you know whats going on . I would do exactly opposite , I ld fill the place with human rights activists and…
PATRIQUE
the bad and evil drug suspect ........was unfortunately killed ..... to expand the investigation .... and the bad evil pills only 100 000 are gone somewhere ? and the nice straight lawful officer is sitting in a nice ferrari shaking…
Graham
And so it begins, here come the farcical trial to end all trials and I bet the outcome will be most favorable for Joe Ferrari, probably has his cars and house back already. 555 TIT