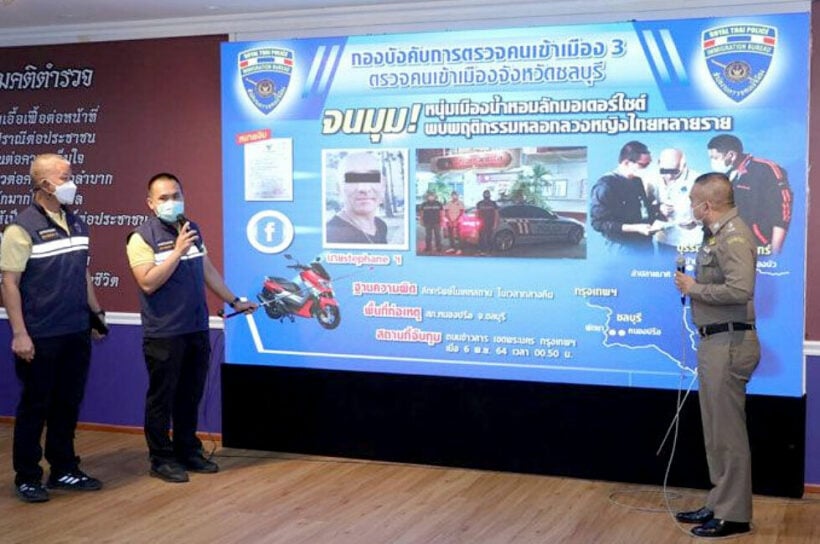 PHOTO: A French man was arrested after a 2-year crime spree. (via Naew Na)

Police announced with a giant vinyl sign that they had captured a “man from the land of perfume” who has been raising a stink around Thailand since his arrival 2 years ago. A 46 year old French man identified only as Stephane has been arrested after leaving a trail of crimes and forlorn Thai women in his wake since late 2019.

The French man arrived in Thailand in October of 2019 and racked up an impressive string of complaints, with an unidentified number of Thai women filing complaints against him at 4 separate police stations. The women reported a variety of offences from stealing a motorbike to scamming them to abusing their photos and bank accounts.

Police in Nong Prue in Pattaya, as well as 2 police stations in Buriram and one in Surin in the northeast of Thailand, had received complaints from women about the French man. Pattaya police had issued a warrant for his arrest in September for burglary.

At the end of June, a woman reported her motorbike stolen from a resort. Multiple women complained that the French man had borrowed money from them and then disappeared. Some Thai women reported that he had posted their pictures on Facebook to market them as prostitutes. He was said to have been using some women’s bank accounts to move money, possibly in questionable or illegal activities.

Police had asked immigration for assistance in tracking down the French man and he was finally spotted and taken into custody on Khao San Road in Bangkok. He was brought back to Nong Prue police in Pattaya before immigration officials held a press conference at Suan Phlu Headquarters in Bangkok describing his 2-year-long crime spree.

The French man remains in custody now, and police are continuing their investigation and expanding to try to track down more possible complaints against him and offences he may have committed.

Two arrested for allegedly kidnapping a woman, posting video her tied up on TikTok