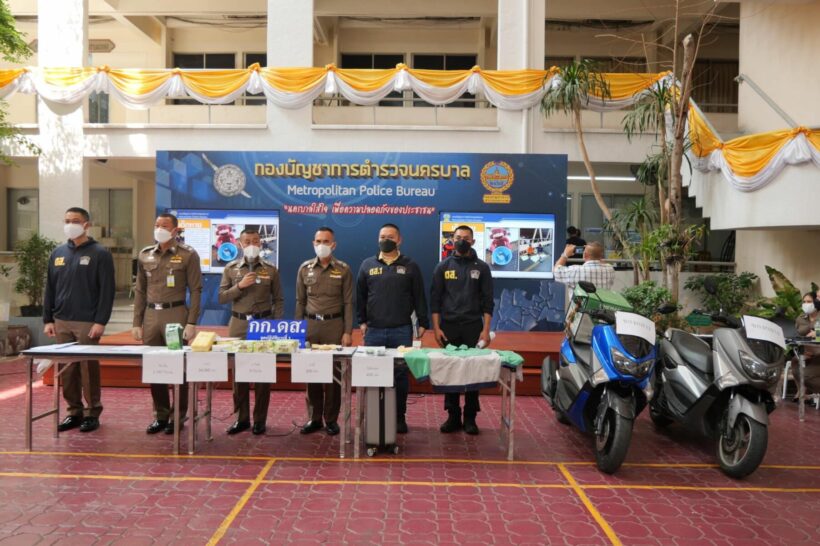 Two food delivery drivers were arrested in Bangkok for allegedly transporting ketamine and methamphetamine to customers. The suspects allegedly confessed to trafficking the drugs for two years.

Prior to the arrest, officers from the Children and Woman Protection Sub-Division arrested nine people, allegedly while they were getting high off benzodiazepines. Officers seized over 420 pills of the benzodiazepine Flunitrazepam. During the questioning with police, the group reportedly told the authorities that they brought drugs from food delivery riders.

Officers in Bangkok tracked down two food delivery drivers. 22 year old Nethi and 21 year old Raewat reportedly confessed that they have been smuggling drugs since April 2020. They would pick the drug from a dealer and keep it at their houses until the customers contacted them to make a purchase. They shared that they received around 50,000 baht per month.

At their houses, the officers seized three kilograms of methamphetamine, 34,000 amphetamine pills, 300 ecstasy pills, 1.197 kilograms of ketamine, two bank accounts, three mobile phones, and two Yamaha NMAX motorbikes, which had food delivery boxes on the back.

HiuMak
2 years to discovery... Peddlers were using this means since pandemic

AlexPTY
so it's not a food, i guess
MikeW
On 3/14/2022 at 10:38 PM, HolyCowCm said: Kratom My mistake good thing I'm not looking for any
Tim_Melb
Reminds me of a miss spent youth. Many years ago in Melbourne there was a certain Turkish Cafe in Brunswick St where you could walk in and walk up to part of the counter away from the cash register and…

Benroon
One of the largest benefactors of the drug trade in Thailand is the untouchable one. You don’t build immense wealth without it. Hence it will always be a token effort to take out the foot soldiers to show willing.