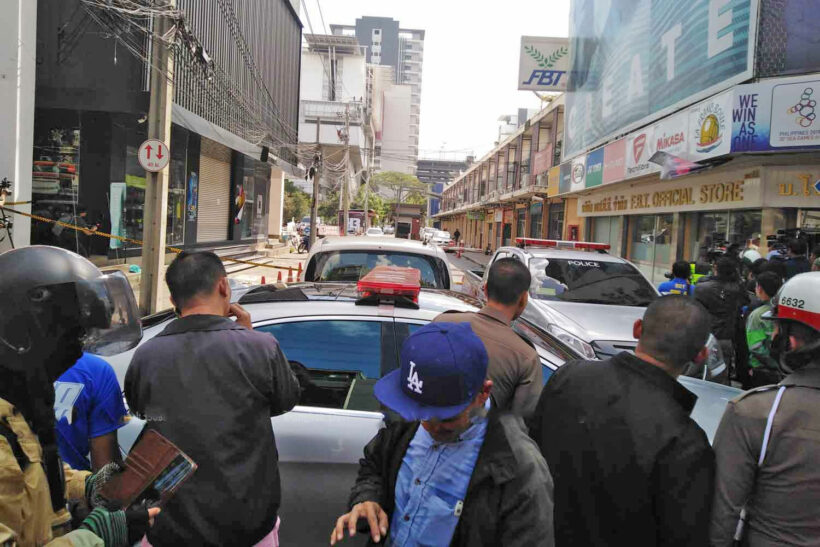 PHOTO: Police at the scene of yesterday's shooting incident in Bangkok - Bangkok Post

Multiple charges have been lain against against the man who allegedly fired more than 50 shots in downtown Bangkok early yesterday, including attempted murder. Police say the charge was filed because a ballistic examination showed some of the gunshots were aimed at people opposite the suspect’s position.

Other charges include carrying gun without a permit, discharging a firearm in a public place and narcotics charges. The man’s identity has not yet been released.

The incident began at about 4am near Chulalongkorn University, at a market for locally made sports garments. Periodic gunfire continued for more than an hour.

Police rushed to scene and cordoned off the area, telling locals to stay indoors. A police negotiator talked the shooter into surrendering and no injuries were reported.

An eyewitness told police that the shots were fired by a man about 40 years old and he and some friends went for a look. The man fired on them, forcing them to run for cover.

The suspect reportedly told police he was under stress caused by family and business problems.

The incident comes less than a week after a rogue soldier went on a murderous rampage in the northeastern province of Nakhon Ratchasima, killing 29, including three police officers. The gunman was shot dead at the Terminal 21 shopping mall, the scene of a dramatic 12 hour siege.