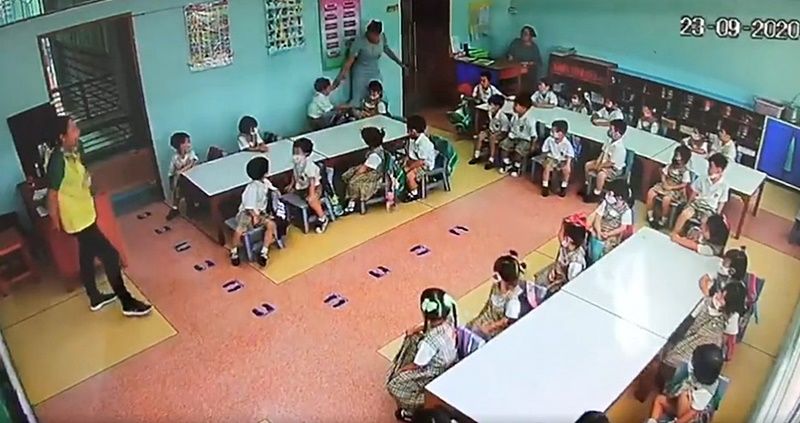 All of the 42 Sarasas private schools throughout Thailand will be investigated by the Office of the Private Education Commission, or OPEC, after a teacher was caught on camera allegedly hitting kindergarten students. The teacher, Ornuma “Khru Jum” Plodprong, allegedly beat young students at the Sarasas Witaed Ratchaphruek School in Nonthaburi, a suburb in Bangkok on the western banks of the Chao Phraya.

Khru Jum, along with other teachers that allegedly witnessed the abuse, were fired and may face criminal charges pressed by parents of student victims.

Surveillance camera footage of the classroom at the Nonthaburi school shows a teacher, identified as Khru Jum, hitting kindergarten students. In one clip, the teacher pushes a 3 year old student down to the ground and pulls a student’s hair. Another clip shows the teacher dragging the student across the classroom. Other teachers who were in the classroom did not intervene, the footage shows. OPEC secretary general Attapon Truektrong says staff members who witnessed the alleged abuse were fired.

The commission is teaming up with Department of Mental Health to send psychiatrists to the school to evaluate children who may have faced some abuse from their teacher. OPEN is also working with the parents to press charges on staff members.

There have been complaints about bullying and inappropriate punishment at 34 other Sarasas schools, according to OPEC. The commission has set up a special committee to investigate all of the 42 Sarasas private schools. All of the Sarasas schools will need to allow parents to access classroom surveillance camera footage.

The Sarasas schools do not have a discipline policy, according to Sarasas Affiliated Schools chairman Pibul Yongkamol, the board that oversees the 42 schools. He says teachers are told to teach with “love and care,” but there are no set guidelines or rules regarding punishment.

It’s also been revealed that Khru Jum didn’t have a teaching license. OPEC is now asking all the Sarasas schools to check that all teachers have the proper teaching license issued by the Teachers’ Council of Thailand. Attapon says the Nonthaburi school broke other rules, like the maximum class size.