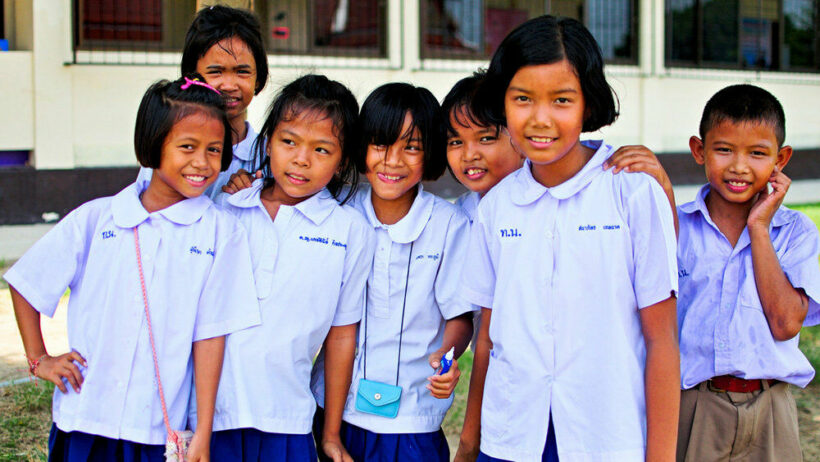 Thailand’s young learners have access to cheap or free education through government-sponsored schools. Also known as public schools, the curriculum is determined by the country’s Ministry of Education. As Thailand is a theocracy, the Buddhist practises that are recognised by the government are also taught at public schools. At the elementary level, students are taught 8 core subjects each semester. Those subjects include: mathematics, Thai language, social science, science, health and physical education, technology, arts and music, and foreign languages. When students are in Matthayom 4, or around 16 years of age, they are also given the choice of 1 or 2 elective courses. Most, however, choose the science programme or the English language mathematics programme.

Other electives include foreign language programmes and the social science programme. As for learning English, both elementary and secondary levels have special English programmes that are known as the English Programme and the Gifted Programme. The former focuses on students being taught every subject in English, with the exception of Thai language and social studies. The Gifted Programme focuses on learning mathematics and science in the English language. Currently, the Ministry of Education has set the English language curriculum to follow the Common European Framework or CEFR for students at all levels of public schools. However, it is not clear if the schools are following the framework or are evaluate students’ skills in accordance with the framework. 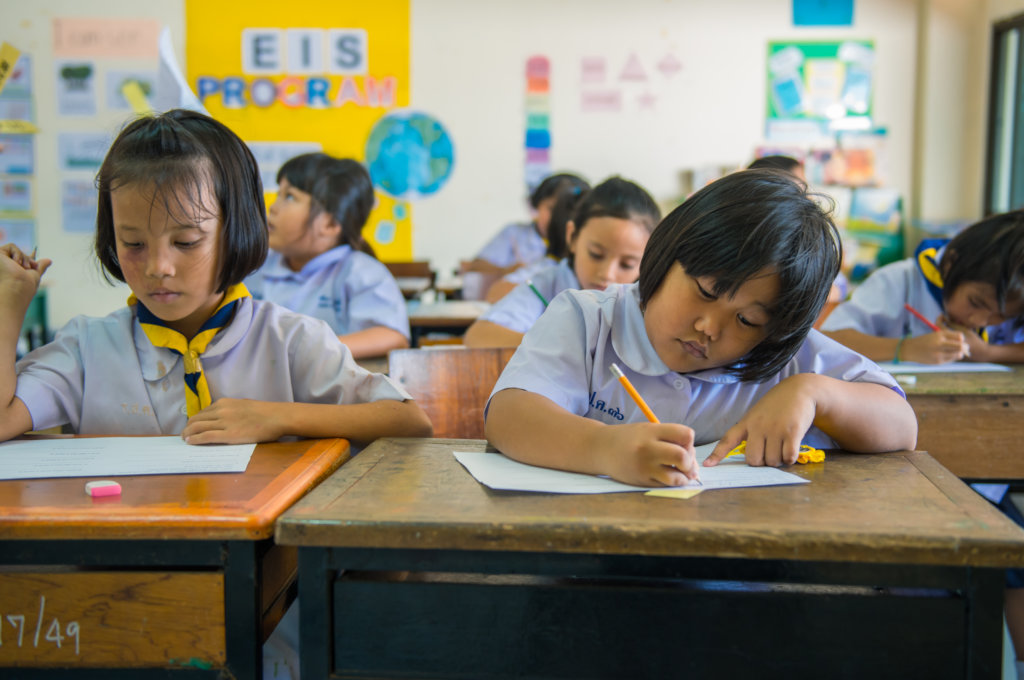 For non-Thai students who wish to study at Thai public schools, their grade level is determined by their age. But, Thailand’s education policy concerning migrant children deems that they must be proficient in the Thai language and have completed a Thai learning centre programme before being accepted into a public Thai school.

A previous study of migrant children in Thailand noted that there were some kinks in the first-time placement of migrant or expat students in Thai public schools. For example, if a student was younger than 7, they would be placed in kindergarten and if a student was older than 7, they would be placed in first grade. This obviously presents issues if the student is much older than a first grader. However, the purpose of this placement, was supposedly to ensure that migrant students were better prepared to start Thai school.

Thai schools tried to address this issue by making a rule that students could not be older than 9 years when enrolling in Thai school. But, then learning centres ended up not giving recommendations to schools for older students that completed their programmes. 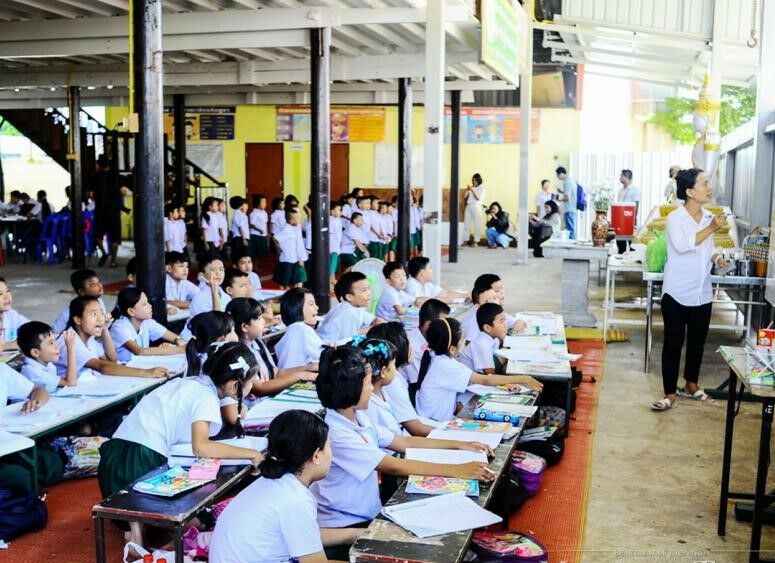 Part of the curriculum of Thai public schools includes certain cultural mandates set forth by PM Prayut Chan-o-cha. In 2017, PM Prayut, who is also the junta leader, ordered schools to display a list of 12 “Thai” values that he had created:

Loyalty to the Nation, a Religion, and the Monarchy
Honesty, sacrifice, endurance, and noble ideology for the greater good
Gratitude for parents, guardians, and teachers
Diligence in acquiring knowledge, via school studies and other methods
Preserving the Thai customs and tradition
Morality and good will toward others
Correct understanding of democracy with the King as Head of State
Discipline, respect for law, and obedience to the older citizens
Constant consciousness to practice good deeds all the time, as taught by His Majesty the King
Practice of Self-Sufficient Economy in accordance with the teaching of His Majesty the King
Physical and mental strength. Refusal to surrender to religious sins.
Uphold the interest of the nation over oneself.

Taking the mandates one step further, authorities told schools to hang a banner that listed PM Prayut’s teachings on their school premises. The government also provided the schools a song, poem and a 12-part film that was based on the teachings. And, as Thailand locals love using the LINE application on mobile phones, the Ministry of Information, Communication and Telecommunications created set of app stickers that represented the 12 values to be used in chatting on the app. 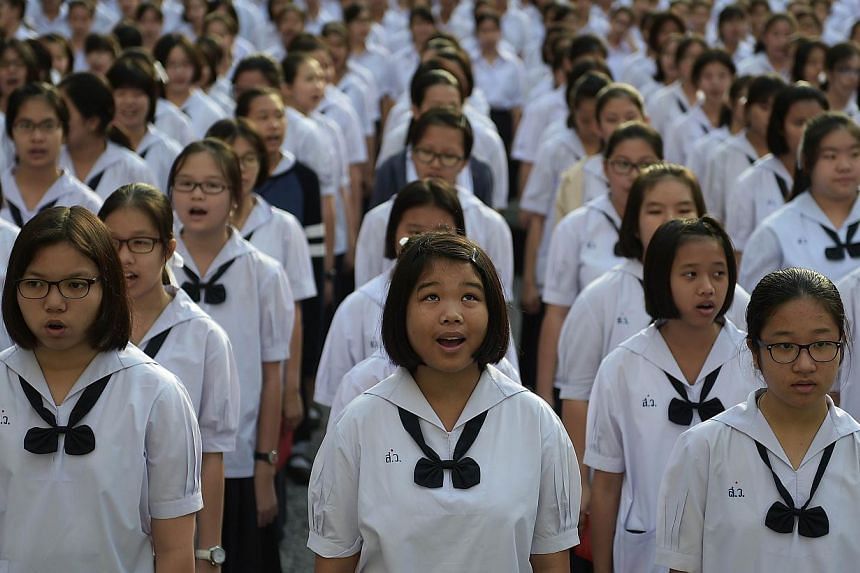 Again, under PM Prayut, the military government mandated that kindergarten students must learn how to do push-ups, salute, eat from metal trays on the floor, and crawl under netting. This type of learning was part of the PM’s “land defender battalion” programme. Thai-language news outlet Matichon Online cited that “soldiers showed children military operations and taught them patriotic values to love the nation, religions, and the Thai monarchy through the…..12 Thai Values. The news outlet also said that the Royal Thai Army would be running the programme with many more schools joining it in the future. 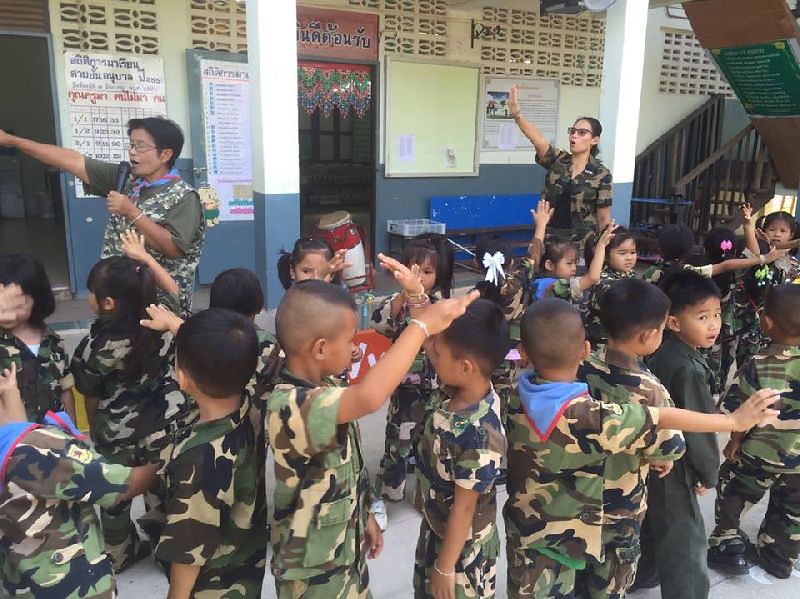 Thai students also have a fair share of holidays and events to build up awareness and respect for their teachers and country. One famous celebration is that of Wai Kru Day. This is the day in which students say thank you to their teachers or educators by presenting them with flowers known as “dok khem” (needle flower or Ixora) because it represents the student’s promise that his/her brain will be as sharp as a needle. It is expected that students present the dok khem while performing a polite gesture called the “wai,” which is described as bowing with your hands in a prayer-like form near your face. Wai Kru Day at school will normally feature a ceremony that honours the teachers. 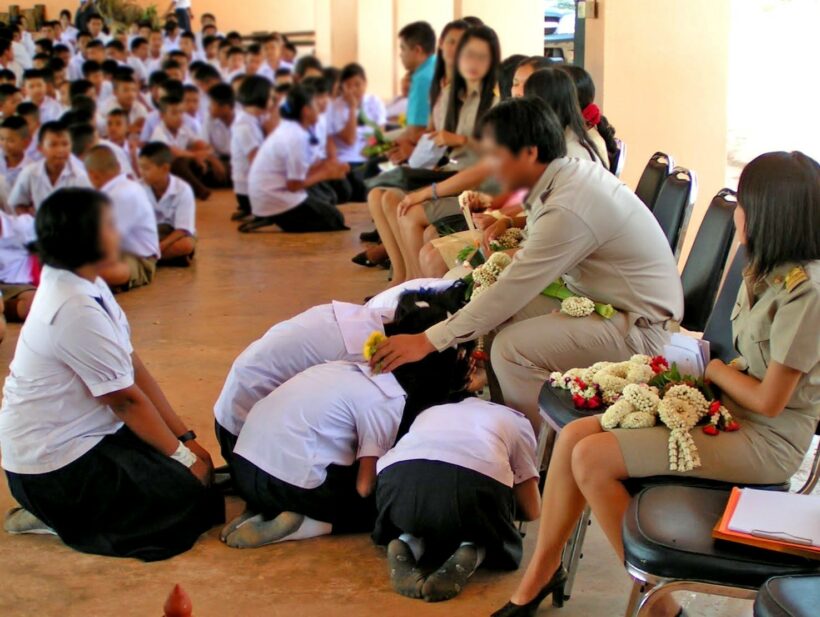 LoongFred
12 hours ago, Soidog said: I think the Thai authorities feel comfortable teaching subjects like Maths, physics and other science subjects. What they won’t do is educate students on matters which cause them to look outside of Thailand or in…
Stonker
19 hours ago, King Cotton said: shouldn't your hard-working daughter have been able  to quote Paris or New York, perhaps Presumably you threw that in tongue-in-cheek to see if anyone noticed? 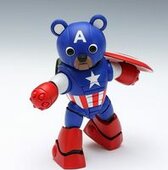