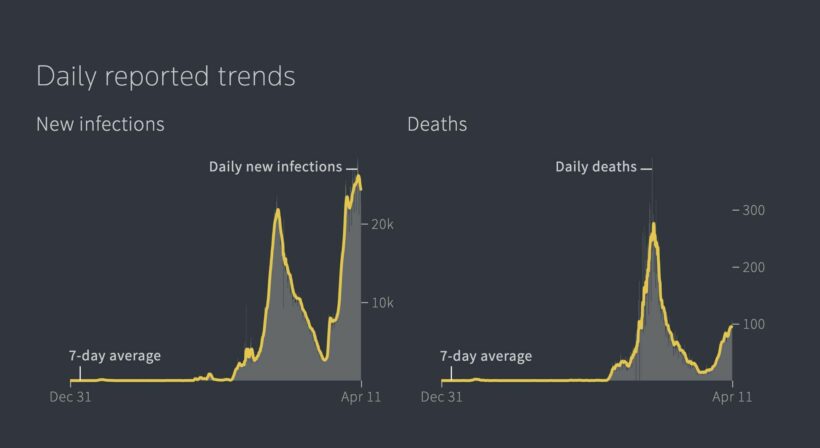 As people throughout the country begin their Songkran break, Thailand’s daily death toll from Covid-19 has breached the 100 mark for 3 consecutive days — with 108 deaths, 105 and 101 deaths reported for Sunday, Monday and Tuesday, respectively. Today, less than 20,000 new infections were reported, compared to yesterday’s nearly 22,400 – in that case a downward trend.

As of Sunday, almost 251,000 patients were being treated in hospitals and other medical facilities across the country. Meanwhile, there were nearly 2,000 hospital patients were receiving treatment for lung infections, nearly 850 of which were on ventilators.

After the Songkran holiday, the daily infection rate is predicted to shoot up to between 50,000-100,000 cases, according to the Head of Siriraj Hospital Faculty of Medicine, Dr. Prasit Watanapa. His prediction has not been repeated by either the CCSA or the Thai governent.

The silver lining, he says, is that the daily death toll likely will not not exceed 200. (even though that is approx. twice the current daily toll from Covid-related deaths). If it does, the amount of severe cases would be enough to overwhelm existing treatment facilities.

Thailand is one of the few countries in Asia with an increasing daily infection and death rate.

Starting last Friday evening, Thais began leaving Bangkok and other major cities for domestic vacation destinations or their home provinces. The official Songkran public holiday begins on Wednesday, April 13, and ends on Friday, April 15, though celebrations will begin today and last through the weekend.

Following is the daily death toll so far for the month of April:

Ramanathan.P
Everyone has to accept...it is Darwin's Theory......Natural selection and Survival of the fittest. Herd immunity, that is the reality