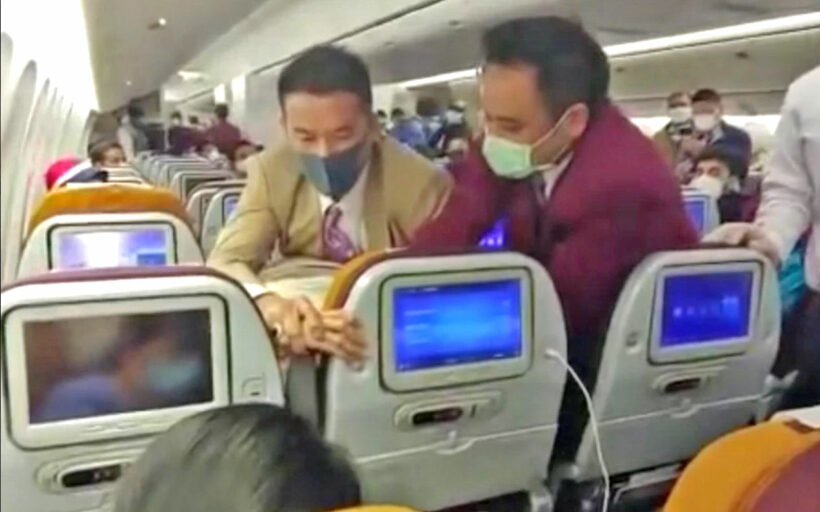 A shocking Facebook video claims to show the moment Thai Airways cabin crew tackle a passenger who deliberately coughed at them. The unverified footage is said to have been taken on a Thai Airways flight in Shanghai on Friday, and was shared online by YouTube user Fugu M.

Reportedly, the plane had already landed at Shanghai’s Pudong International Airport, but passengers were forced to remain aboard for seven hours as a result of tighter Covid-19 coronavirus screening procedures at the airport, which created a backlog.

Some passengers became irate at the delay, and one female passenger showed her anger by deliberately coughing on staff to get them to open the doors.

“One Chinese woman went stir crazy on a Thai Airways flight and deliberately coughed on a female flight attendant to try to pressure staff to open the doors and let her out.”

“[A] Senior male flight attendant was having none of it, warned her, then a scuffle ensued. He was going to put her in cuffs, but eventually chose not to.”

Footage shows the woman being restrained by a steward, while other crew, who can be seen wearing face masks, come to his assistance.

“Stay down! Stay down, please!”

Thailand’s Channel 7 spoke to Thai Airways, who confirmed the incident occurred on March 6 on flight TG664 from Bangkok to Shanghai.

A spokesperson said the plane landed safely at the airport but was notified by ground staff that all passengers and staff would be required to undergo intensive screening procedures and that, due to a backlog, it would be seven hours before they could leave the flight.

The ship without a port – Costa Fortuna heads for Singapore