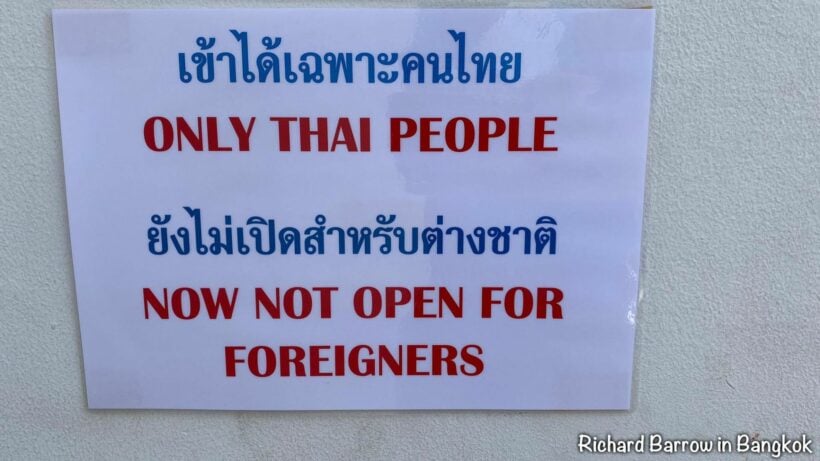 The Wat Pho (Temple of the Reclining Buddha) is open, but only if you’re Thai. Foreigners are not allowed in, even if you’ve been living in Thailand for years. The famous Bangkok temple re-opened last week but are keeping foreigners over fears of the coronavirus.

A sign with red letters, all capitalised “ONLY THAI PEOPLE … NOW NOT OPEN FOR FOREIGNERS” is posted at the entrance. Expat blogger Richard Barrow posted photos of the signs on Facebook after visiting the temple and being denied entrance.

“I told them in Thai that I’m not a tourist, but wanted to pay respect to the Buddha. They just replied to me, no tourists allowed.”

Wat Pho is in the process of restoring the Reclining Buddha as well as some of the temple’s paintings. The temple is restricting access for the “safety of tourists”, Wat Pho posted on its Facebook page. The temple will reopen to the general public on July 1. Another spokesperson says the coronavirus is the reason the temple is banning foreigners.

“It’s because most Covid-19 cases were found in foreigners,” a temple representative told Coconuts Bangkok, confirming that they are only are only allowing Thais to visit at the moment.

There’s limited reports on the number of coronavirus cases in foreigner in comparison to Thais, but incoming international travel has been restricted since the end of March. Back in March, out of the 1,524 coronavirus cases reported at the time, 1297 were Thai and 227 were from foreigners coming into Thailand. In recent weeks the only new cases have been repatriating Thais, returning from overseas.

A spokesperson from the tourism ministry told Khaosod that temples can decide to allow foreigners or not, but said tourist destinations should wait before letting foreigners in.

Other recent cases of xenophobia have reared their head with foreigners reporting restaurants refusing them entry, bus companies (Transport Company has an official ‘policy’ to refuse foreigners based on the ’emergency decree… no such passage exists in the decree) denying foreign passengers, random tourist attractions, hair salons and massage services getting in on the act as well.

Thailand’s Public Health Minister also made his feelings well known with a public outburst against ‘dirty farang’ at a health ministry PR outing at Siam BTS station in early March when foreigners declined the free handouts of the ubiquitous cheap blue medical masks.

‪I was hoping to visit Wat Pho, the Temple of the Reclining Buddha, as I had heard it had just re-opened. But the sign…

Posted by Richard Barrow in Thailand on Wednesday, June 10, 2020