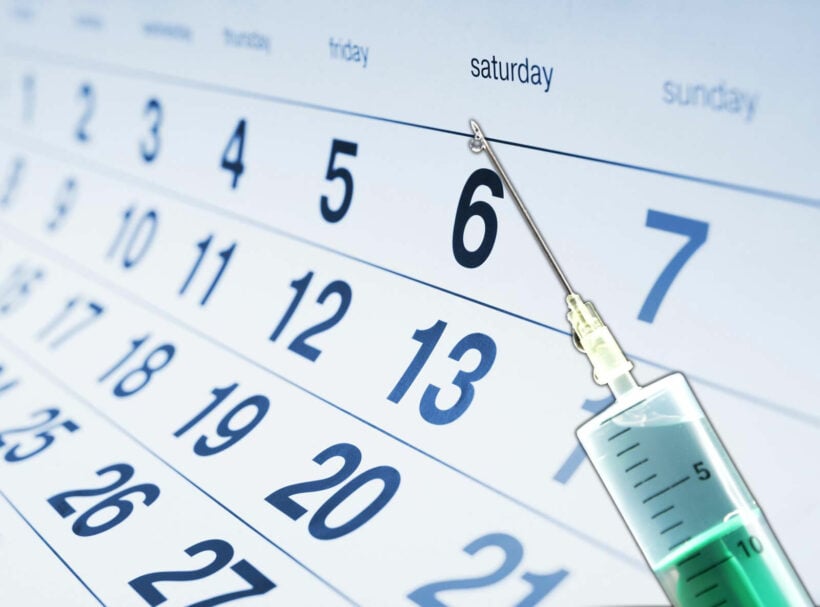 PHOTO: AstraZeneca warned in a letter last month they would only deliver 3 million vaccines each month. (via Britannica)

AstraZeneca now looks like it will deliver far less than the original 10 million vaccines announced, but letters newly leaked show the Public Health Ministry was alerted at least a month ago that the actual amount of doses would be far less than that. In a letter dated June 25 to Minister of Public Health Anutin Charnvirakul, AstraZeneca confirmed with him that it would be able to supply Thailand with just 3 million vaccines a month.

According to the information from Isranews Agency whom the letter was leaked to, the letter last month referred to the deal agreed to last September stating that AstraZeneca would produce vaccines locally with Siam Bioscience, a company wholly owned by a subsidiary of Crown Property Bureau, and provide one-third of those vaccines produced for use within Thailand, a total of 3 million vaccines per month, while exporting another 6 million doses abroad. Many have pushed for the government to enact a restriction or ban on exporting vaccines while Thailand is in a growing Covid-19 crisis with a severe inoculation shortage.

Anutin admitted that he received the letter and has been aware of the actual figures being 66% lower than what has been publicly discussed for some time, but defends himself by explaining that he fought back after receiving the letter, pressing AstraZeneca to rectify the shortfall. In a response on June 30, 5 days later, Anutin explained that with Covid-19 rapidly growing, Thailand needed 10 million vaccines a month as scheduled in order to keep up with the already sluggish vaccination rollout.

For information about Covid-19 insurance for Thailand residents, CLICK HERE.

Stardust
15 minutes ago, AlohaFromThailand said: In every article I’ve read saying they are unable to meet their commitments to furnish vaccines. They have NEVER MENTIONED why they can’t produce the vaccines promised. Cmon you really dont know why? I really…
Stonker
2 hours ago, Stageaman said: This article is badly written and misleading: 1) The AZ 25 June letter did not offer only 3m doses per month, it offered 5-6m. 3m was the quantity requested by the Thai health ministry when…
Stonker
3 hours ago, stuhan said: So Anutin tries to cover his back again.I mean how did he ever think  3 million doses would be enough per month,it would take around 2 yrs to achieve  100% of the population being vaccinated.?  The…
harry1
1 hour ago, Stardust said: Yesterday I sent the link to Thai news outlets for the letter and they worried a lot so I will no more do but you find it in the Thai enquirer. If you expect Thaiger…
annoynimous
Az has made a commitment to allow another 3-4 million additional doses per month. That's 6-7 million and possibly the next few million by Sinovac.

Foreigners over 75 can get a vaccine at Bang Sue Bangkok