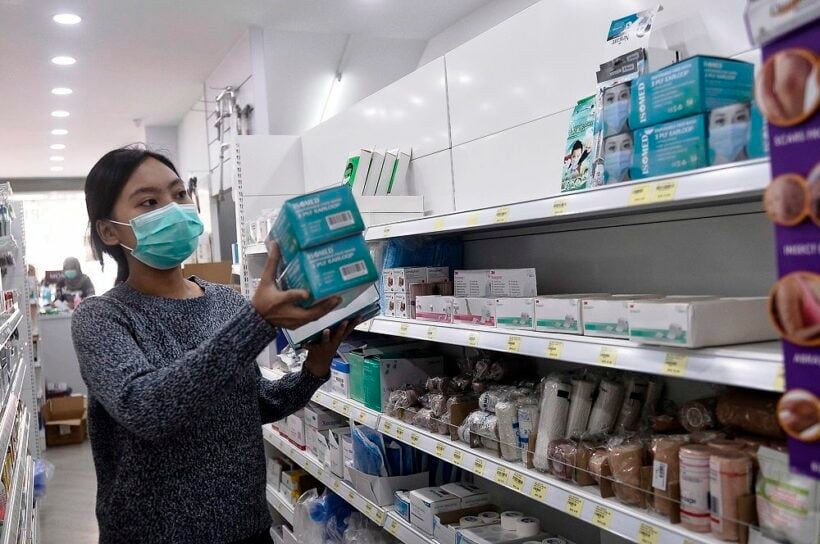 UPDATE: The Technology Crime Suppression Division of Thailand is working with police to search for more suspects involved in a network connected to the March 31 arrest of Phanyot Paradonraphab, chief of the little known Paradonraphab political party. Phanyot allegedly imported 513,300 masks illegally under a company he opened called Thai Health International and managed to sell more than 640,000, making a cool 14 million baht in cash. He has been released on bail as he is not considered a flight risk (seeing there are no flights at the moment).

Phanyot was linked to 2 other men who were arrested for allegedly hoarding 200 million face masks and is one of the key players in the market. Police are expanding their investigation to find other ‘accomplices’.

The first suspect, Sornsuvee “Boy” Poo­raveenasawatchari, has broad political connections and is accused of promoting the products and manipulating the market. Working as an aide to deputy agriculture minister and MP Thamanat Prompao, he was also arrested for inputting false information into a computer system about face mask sales.

The second suspect, a former candidate for the Paradonraphab Party, Anonvat Vorametchayangkoon, was arrested last week in connection with the case, along with 100 boxes of face masks. Anonvat claims he bought the masks from Phanyot for resale.

Now, police are seeking the operators of a Facebook page, “Mam Pho Dam” or “Queen of Spades,” for defamation and spreading false information, after a complaint from Sornsuvee. The site admin has made a post on Thursday accusing the police of unfair treatment.

“Is this a reward for the risk I had taken? Do they really want to make me a culprit? I’m totally upset about this. Why go after me? Go after those who have cheated the country. Don’t drag me into any dirty political games.”

As of  this morning the page has been shut down. An open message sent by the page’s owner to PM Prayut Chan-o-cha via Thai Rath reads…

This is Mam Po Dum, do you remember me? I was the admin of a small page, a page that you once commented was a good one that helped people for a long time. But now the “Queen” is in confusion, accused that our information is fake and I must reveal my identity. Instead of going after the people involved, just check their bank accounts, you will certainly find who you are looking for: “Boy.”

He is an easy going guy and “innocent” then you allowed the authorities to attack him finding the details to find the missing face mask, all that ‘Boy’ did was post information on the page.” Please inform your subordinate that the ‘Queen’ will not go to TCSD and use your full authority to make me go die instead for the accused. I think I should receive goodwill from the government because we were pursuing where the missing masks went, but it turns out that you want to summon me instead. Is this correct PM Uncle Tu? I will just leave it like this.

Police defended their investigation, describing it as “routine.”

“The Mam Pho Dam page might think it’s doing the country a good service but if damages another party with what could be false information, police also need to investigate this.”

“We have relatively clear evidence that the page posted false information. The page reposted information from Sornsuvee, which is already known to be false. Therefore, the page is punishable under the Computer Crime Act.”

The news was met with outrage from netizens who criticised police for prioritising a hunt for the whistleblower rather than the accused wrongdoers. The hashtag #SaveQueenofSpades soared to top trending on Thai Twitter last night.

“What! If the one who tells the truth is called a culprit, then where can I find justice in this country?”

A video supplied by Mam Pho Dam to Thai media (in Thai) can be seen HERE.

Meanwhile, yesterday a team of commerce officials and police raided a mask factory in Samut Prakan, just south of Bangkok, following a tip that it allegedly produced, sold or purchased masks without permission.

“The factory’s executives will be charged with failing to inform the authorities about their costs and the location of their warehouses.”