283,910 people have now fully recovered in Thailand since the start of the pandemic. 116,135 are still receiving treatment in hospitals and field hospitals. 3,464 people remain in ICU at this time and 846 patients are on ventilators.

Watch out for increased restrictions in the news over the next few days as the Thai government grapple with one of the highest rises in the news, per capita, in south east Asia. In Thailand, a total of 92.8% of all new infections and 97.2% of all Covid-related deaths have occurred since April 1.

Here are the provincial totals for the past 24 hours, thanks to the government’s NBT… 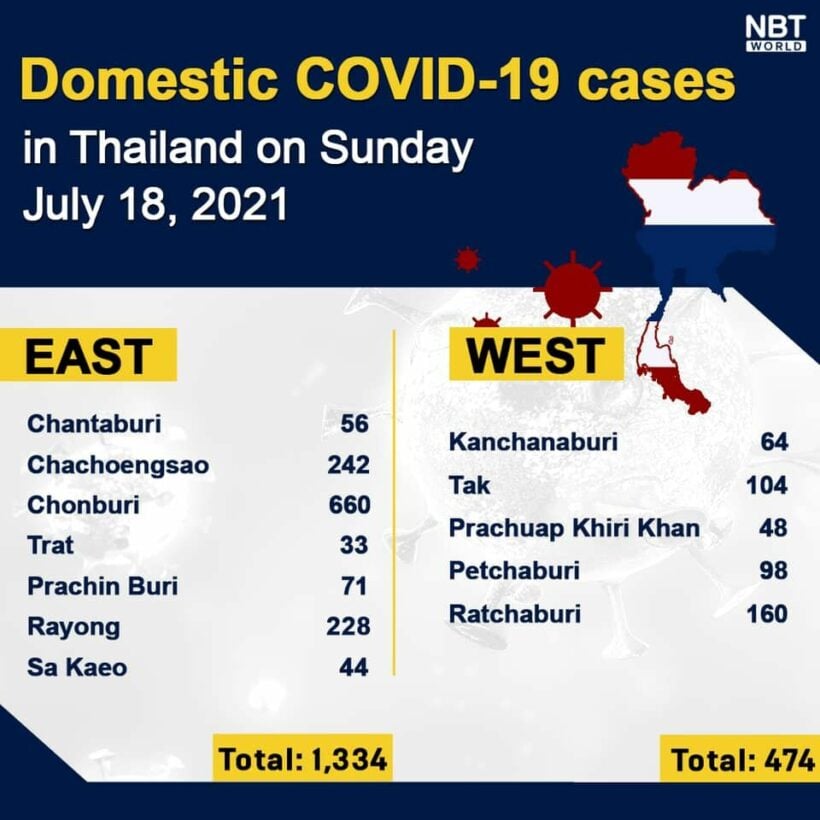 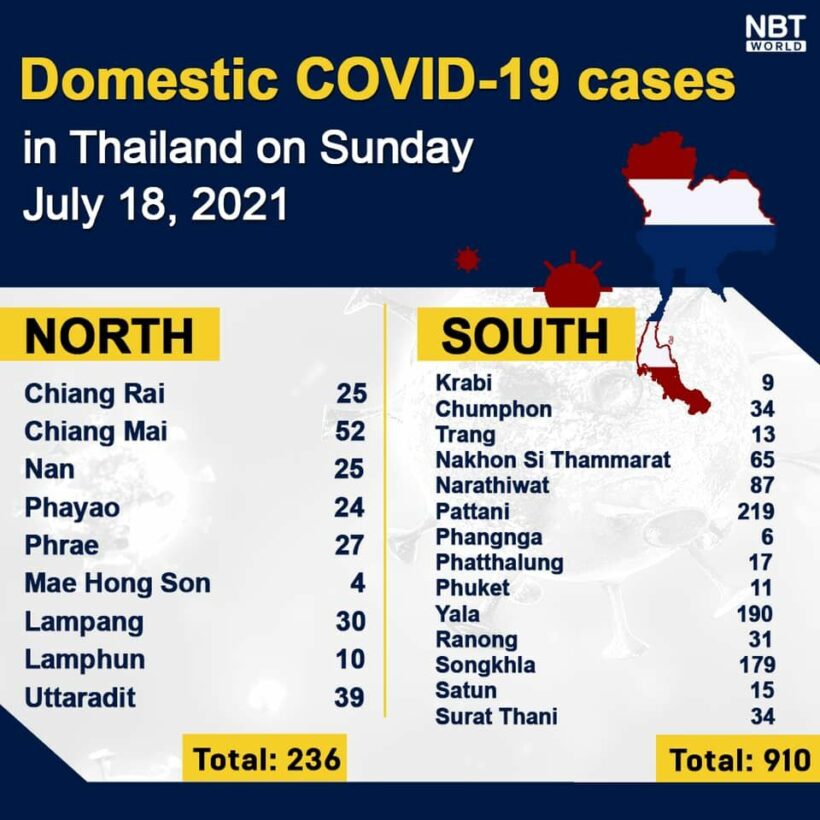 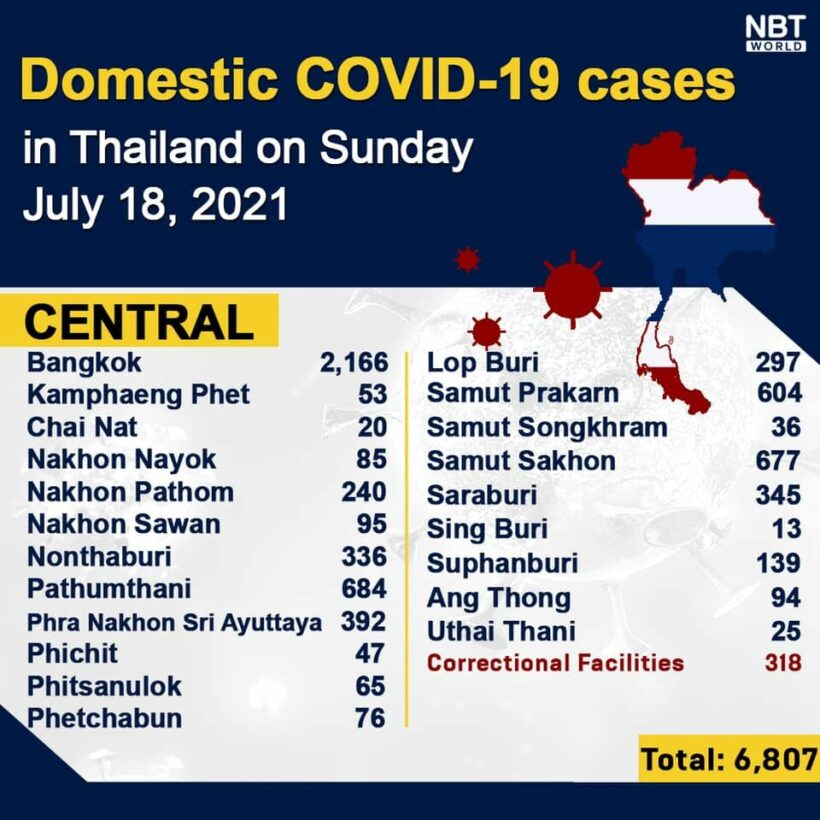 • According to Thailand’s leading online Thai-language news outlet, Thai Rath, the restrictions imposed for the dark red provinces will now include Chon Buri (including Pattaya), Chachoengsao and Ayutthaya provinces. The new provinces are included from Tuesday.. There are now 13 provinces zoned as dark red.

• Across the world, the new cases are now surging again after dropping to around 300,000 per day on June 22. 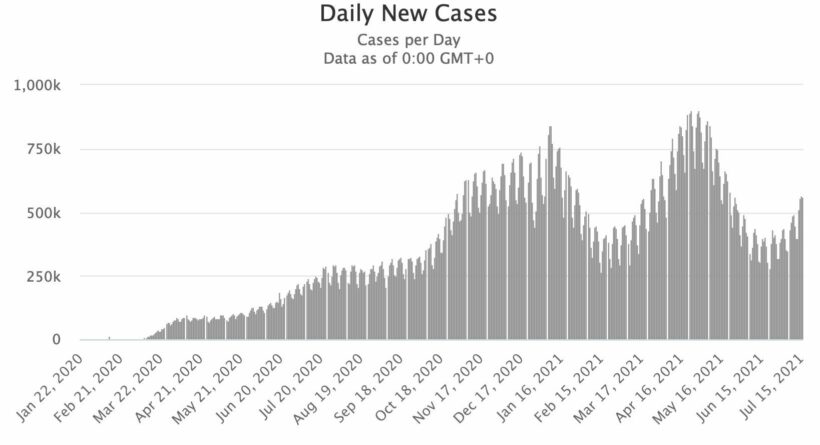 • The Samui Plus plan, launched on July 15 with much fanfare with a delegation visiting for Bangkok’s TAT office, has had a luke-warm launch. Bangkok Airways would be asking themselves how long they can continue to support the re-opening of the BKK-Samui route with 3 flights a day given the low uptake.

The Phuket Sandbox, also a way fully vaccinated travellers can enter Thailand without doing a 14 day hotel quarantine, has been a little more successful with an average of 438 people arriving each day (international arrivals include other travellers to Phuket and Thais, not just Sandbox tourists). There was another 11 local infections in Phuket in the past 24 hours.

The number of Phuket arrivals is steadily increasing.

881 international travellers arrived at Phuket International terminal yesterday. 6 flights flights arrived. There are now 7,462 passengers arrived since July 15, around 50-60% actual tourists according to our source at the Phuket Airport. There was another 4 infections from recent arrivals yesterday. A total of 17 ‘Sandbox’ infections.

• For the safety of its citizens and to protect from the spread of Covid, the CCSA has banned any activities or gatherings that involve more than 5 people. The ban on gatherings comes coincidentally just hours before planned mass anti-government protests in the capital yesterday.

Paco
20 hours ago, JamesR said: Yes they need to close down and vaccinate as many people and as fast as possible in Thailand.  I can not say why and what they are doing in Thailand I can only say what…

snapdragon
On 7/19/2021 at 8:29 AM, AussieBob said: Those are anecdotal studies as I said @BlueSphinx   There is a very strict and highly controlled approval process before any drugs are approved for the treatment of any medical problem.  I take it…
JamesR
11 hours ago, Paco said: Buy the way congratulations with getting your freedom back, lol I have it but I stay at home anyway Me too, even with two jabs I am keeping my head down.

AussieBob
On 7/20/2021 at 12:27 AM, JamesR said: Yes they need to close down and vaccinate as many people and as fast as possible in Thailand.  I can not say why and what they are doing in Thailand I can only…

AussieBob
11 hours ago, snapdragon said: I take it this means the current jabs. ""There is a very strict and highly controlled approval process before any drugs are approved,,,,,,."" Absolute nonsense. Thousand of drugs have been pulled because they hurt people.…