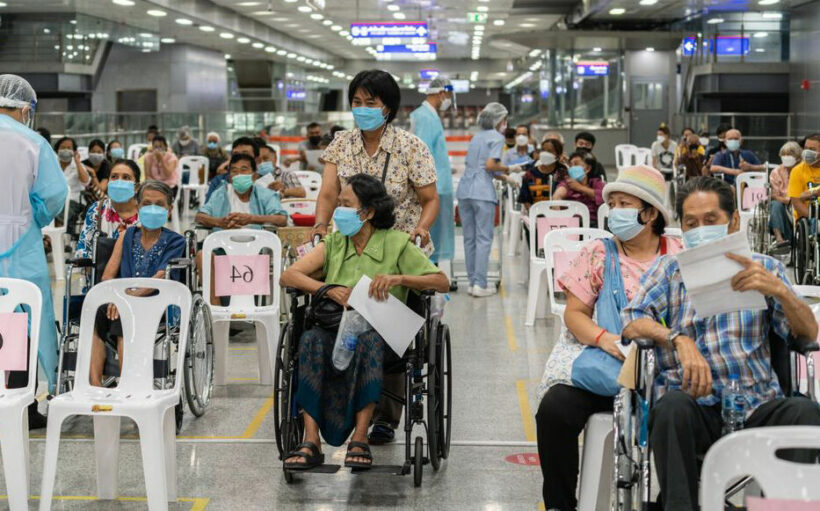 The dramatic drop in new infections over the past week has levelled off a bit with 15,942 new infections being reported across Thailand in the past24 hours, a rise from yesterday’s reported 14,653 cases. 277 of today’s new cases come from the Thai prison system.

There’s also been 257 deaths, the numbers remaining high whilst other trends are more positive.

20,351 patients have now recovered and been released from state care, public and field hospitals over the past 24 hours… this number remaining above the number of new infections for the past 2 weeks.

• In Phuket, the number of new infections, mostly local, continues to worry local officials. It has averaged over 200 for the past 2 weeks with no additional restrictions being put in place to address the rise in local infections. Indeed, the restrictions for entry are to be eased this week, allowing easier re-entry for local residents as well as domestic travellers to return to the island.

The second shipment of AstraZeneca vaccines from Japan is slated to arrive on September 8, this coming Wednesday. The Japanese shipment will have 775 oxygen concentrators to aid in the care of patients with severe Covid-19 infections as well as equipment for the cold chain system that is essential to keep vaccines at a low temperature during storage, transportation, and distribution of vaccines. Read the rest of the story HERE.

• In the battle to get access to high-quality vaccines in Thailand, October is set to see an upgrade with the initiation of administering a mix of AstraZeneca and Pfizer doses for patients. The deputy director-general of the Disease Control Department said today Thailand will receive about 10 million Pfizer vaccines arriving each month beginning in October.

The government now plans to supplement the first dose of domestically-produced AstraZeneca with a second dose of the Pfizer mRNA vaccine 1 to 3 months later. While mixing vaccine brands is still controversial with less data on efficacy and safety, many agree that the AstraZeneca-Pfizer combination is a step up from the current mixture of Sinovac and AstraZeneca commonly in use in Thailand today. Read the rest of this story HERE.

Soidog
6 minutes ago, Guevara said: I wholly agree. I don't know if you have noticed but the UK is streets ahead of testing on a daily basis compared to any European Country. Spain don't even submit figures on Sat or Sun.…

AdvocatusDiaboli
Just adding to above currently Thailand is reporting 1 confirmed case per 3 tests.

Guest1
7 hours ago, AdvocatusDiaboli said: My next guess would be every province, as every province has a police chief. Maybe they all don’t have 30 Ferraris but I’m sure the each live in a mansion. That is not so TPTB.…
HiuMak
16 hours ago, Soidog said: Wasting our time asking for test data it seems. The following link provides a rolling 7 day average for Thailand. As you can see, it’s dropped to 0.78/1,000 which is the lowest since early June.…