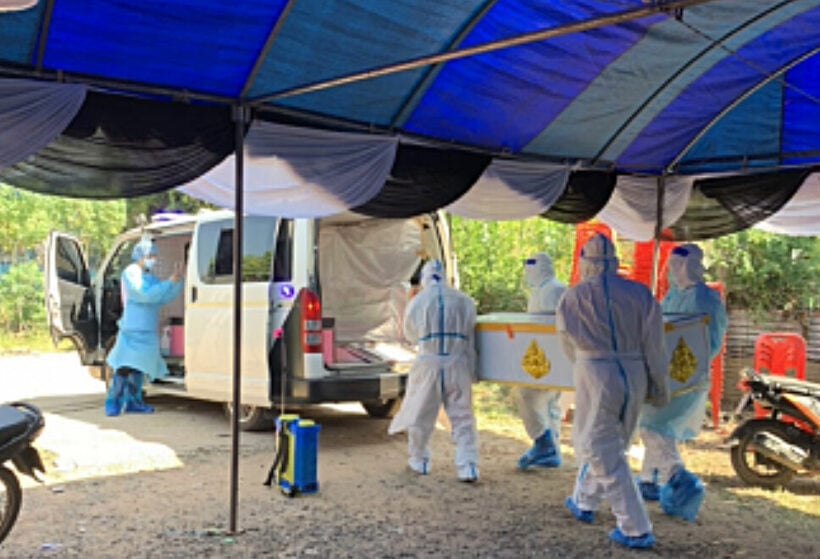 PHOTO: Funeral attendees were quarantined after the deceased tested positive for Covid-19. (via Thai PBS)

Attendees to a large funeral in Phetchabun province have now been isolated after it was discovered that the person who died was infected with Covid-19. The funeral took place in the Nong Phai district of the northern province and was attended by over 200 people who then had to be quarantined.

The Nong Phai District Hospital said that they were wrong to allow the family of the 78 year old woman to take her body after she died in order to perform funeral rites and ceremonies. They informed the people who participated in her funeral that they would need to go into isolation while medical officials observe them for Covid-19 infections.

The woman had been admitted to the hospital on December 3 and was given an antigen test which came back negative. She had diabetes and entered the hospital with fatigue, high fever and diarrhoea and developed a lung infection. Doctors then decided to administer a second Covid-19 test, this time an RT-PCR test.

While waiting for the test results to come back, the woman passed away. The family of the woman was contacted and they were permitted to retrieve her body in order to perform a funeral.

But yesterday the RT-PCR results came back with a positive diagnosis. Once hospital staff was aware that the woman had Covid-19, they immediately contacted the family, but a 200-person funeral had already taken place. Worried attendees began contacting the hospital to get more information about their risk.

The Nong Phai District Hospital director met with the family of the woman who died to offer an apology for their irresponsibility in allowing her body to be released before the result of the Covid-19 test had been received. The governor of Phetchabun also requested from the hospital director a full report of the case.

There was no information on if the 200 funeral attendees had been tested for Covid-19 and, if they had, whether any test results had come back positive yet.

Pi_Tim
Are we talking about Covid or Ebola ?? Seriously, this is a bit ridiculous, and will not help the recovery....

AMc
Out of an abundance of caution (i.e. an abundance of phobia), authorities "...informed the people who participated in her funeral that they would need to go into isolation while medical officials observe them for Covid-19 infections". From the CDC website,…
Jason
I have had to deal with this situation directly in my work. The chances of contracting Covid from a deceased person are extremely low. You would have to breath in their breath or somehow ingest their body fluids to contract…

Shark
she went out with a bang.

palooka
36 minutes ago, Jason said: I have had to deal with this situation directly in my work. The chances of contracting Covid from a deceased person are extremely low. You would have to breath in their breath or somehow ingest…

Plant-based Baiya vaccine can be adjusted for Omicron variant